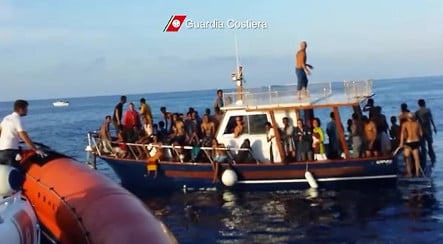 As the search continued for hundreds of missing refugees on Friday, experts said more must be done to prevent another tragedy.

Emergency services on the remote island – Italy's southernmost point – said they had recovered 111 bodies so far and rescued 155 survivors from a boat with an estimated 450 to 500 people on board.

Divers were unable to descend to the wreck on Friday because of choppy conditions but coast guard vessels scoured the surface for more corpses.

UN High Commissioner for Refugees Antonio Guterres commended the swift action taken by the Italian Coast Guard to save lives while expressing great concern about the growing number of refugees.

"He expressed his dismay at a rising global phenomenon of migrants and people fleeing conflict or persecution and perishing at sea," the UNHCR said in a statement.

The boat, which originated from Libya, caught fire half a mile from the coast and a Tunisian survivor, allegedly a people smuggler, was apprehended as prosecutors launched a multiple murder investigation.

The European Union pledged to help Italy to deal with the wave of migrants while the UNHCR said it was actively engaging with countries in the region in a bid to find alternatives for those who risked their lives on such dangerous journeys across the Mediterranean.

Thursday's incident was the second boat disaster this week off the Italian coast. Thirteen men drowned off the southern coast of Italy on Monday when they attempted to swim ashore when their boat ran aground.

A growing number of Syrian refugees have been among those seeking to reach the Italian coastline in recent months.

James Stapleton, from the Jesuit Refugee Service, said the European Union’s border agency Frontex needed to be beefed up with more boats to ensure that asylum seekers did not lose their lives as they crossed the Mediterranean.

“We need more boats in the sea,” Stapleton told Vatican Radio. “I think the reason why people continue to take these risks is that Europe has made it more difficult. In 1992 we had twice as many asylum applications in Europe as we do today.

“We are forcing people to take increasingly dangerous routes and what we need to do is to intervene and put human lives first."

Save the Children’s Italian branch said the latest incident should serve as “a warning for all of us”.

“Once again, hundreds of people, among them several children, lost their lives on the umpteenth voyage towards a better life,” said Raffaela Milano, head of Italian programmes for Save the Children.

Save the Children estimates nearly 22,000 migrants have arrived on the coasts of Sicily, Calabria and Puglia during 2013 – and 4,000 of them were children, many unaccompanied.

Milano said Italy and Europe should not remain indifferent to the constant flow of young foreigners who were often unaccompanied and stressed the survivors of the latest disaster would need urgent assistance to deal with the trauma.

Save the Children has staff in Lampedusa and other locations in Sicily, Puglia and Calabria including cultural and legal experts who work with UNHCR, the International Red Cross and the Italian interior ministry.

Flags flew at half mast across Italy on Friday and schools held a minute of silence for the victims.