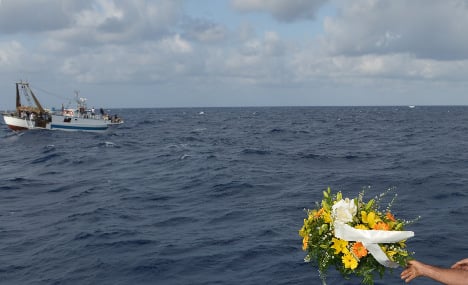 Photo: Alberto Pizzoli/AFP
With the search for bodies off the island of Lampedusa suspended Friday due to bad weather, an emotional Pope Francis said it was "a day of tears" in a "savage world" that ignored refugees.
The government asked Europe to help stem the influx of migrants, as the country mourned the dead.
Islanders in the tiny fishing community held a mass and a silent torch-lit procession, as flags across Italy flew at half mast Friday and schools marked a minute of silence.
"This is a really important ceremony for the victims and for us," said Michele Rossi, a local shopkeeper. "We are used to doing our best to save
people but we have never seen anything like this."
Emergency services on the remote island — Italy's southernmost point — said they had recovered 111 bodies so far and rescued 155 survivors from a boat with an estimated 450 to 500 people on board.
Rescuers said strong currents around the island may have swept other bodies further out to sea but they were no longer able to leave the port because of strong winds and two-metre (seven-foot) waves.
"There is horror down there. Dozens of corpses, maybe hundreds," Rocco Canell, who runs a local diving school and went down before the search was halted, told the Italian news agency ANSA.
"They are all on top of another, piled up, wedged. The lucky ones are those who died first," he said after descending to the ghostly wreck, which lies on the seabed at a depth of around 40 metres.
The migrants, almost all Eritreans, departed from the Libyan port of Misrata and stopped to pick up more people in Zuwara, also in Libya.
They told rescuers they set fire to a blanket on board just off Lampedusa to signal to coast guards after their boat began taking on water.
The fire quickly spread on the 20-metre (66-foot) vessel, which capsized and sank in the early hours of Thursday morning just a few hundred metres from Lampedusa, as its terrified passengers jumped into waters covered in a slick of spilled fuel.
The boat's Tunisian skipper, already arrested in Italy in April for people trafficking and deported back to Tunisia, has been detained.
Interior Minister Angelino Alfano appealed for increased European assistance in patrolling Italy's maritime border and more action in countries
of origin in Africa to stem the flow of risky refugee crossings.
"Lampedusa is the new Checkpoint Charlie between the northern and southern hemispheres," Alfano said, referring to the famous crossing point between East and West Berlin during the Cold War.
"This is not just an Italian problem."
The mayor of Lampedusa, Giusi Nicolini, said: "After these deaths, we are expecting something to change. Things cannot stay the same."
"The future of Lampedusa is directly linked to policies on immigration and asylum," she said.
A Dakar-based rights group Raddho called on African states to take joint action to address the "irregular or illegal migration problem".
It also called on African civil society groups to work together to "inform… young people of the dangers of illegal or irregular migration, which is
considered the road to suicide".
In Lampedusa, the bodies were being kept in a hangar at the local airport because there was no more room in the morgue and not enough coffins on the island, which has a population of around 6,000 people.
Among the survivors were 40 unaccompanied minors aged between 14 and 17 and six women, the UN refugee agency UNHCR said in a statement.
They were housed in a badly overcrowded 250-bed refugee centre that is now overflowing with around 1,000 people including previous arrivals.
Four of the more serious cases were being treated in a bigger hospital in Palermo in Sicily, including a young Eritrean woman who was said by doctors to have suffered a miscarriage.
The International Organisation for Migration (IOM) said migrants pay smugglers between €1,200 and €2,000 euros ($1,630 and 2,718) for the journey.
The IOM said 100 people had died in multiple accidents so far this year before this week's tragedy, compared to 500 in 2012 and 1,500 in 2011.
Alfano on Friday said 30,000 migrants have arrived in Italy so far this year — more than four times the number from last year but still fewer than in
2011 at the height of the Arab Spring revolts.