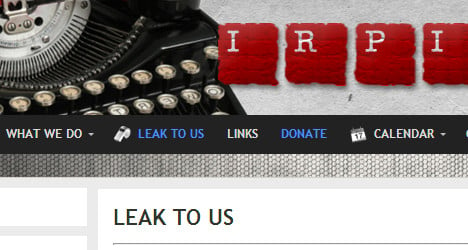 IRPILEAKS, launched on Monday, allows people to provide “anonymous tips” in a “safe and secure environment”, Cecilia Anesi, a journalist, film-maker and co-founder of the Investigative Reporting Project Italy, told The Local.

The team has been preparing the site, built using Globaleaks software and the first platform of its kind in Italy, for the past year.

“It is a simple way for people to post information in a safe and secure way,” said Anesi.

Italy’s high level of organised crime, particularly in the south, and corruption in the private and public sector, as well as among officials, makes it an essential tool for people who might otherwise fear repercussions to expose wrongdoing in Italy in a confidential way.

The team is currently working on three to four investigations involving corruption in the private sector, which they hope will prompt people to come forward with information.

“It might help people to be more active and to take on more of a role (in exposing crime),” Anesi said.

Meanwhile, a report by PriceWaterhouseCoopers has revealed that one in ten contracts handed out by Italy's public sector is fraudulent.

Lorenzo Bodrerom, a coordinator of IRPILEAKS, said that in some cases only the “leaks” of brave people reveal wrongdoing among politicians and people in power, or attempts to hide information from the public.

“The whistleblowers can play a vital role for those journalists who act as ‘watchdogs’ of democracy , especially if we are talking about a democracy which is sometimes corrupt, and where there’s a high risk of Italian mafia infiltration.”