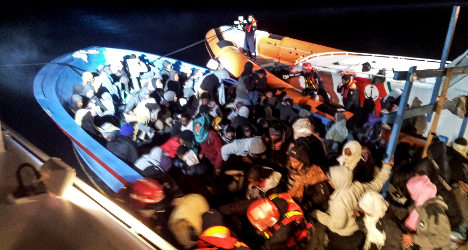 Le Suroit brought the Syrian migrants to the port of Pozzallo in southeast Sicily, where 171 others from the same refugee boat were also brought by a Dutch cargo vessel, the Abis Albufeira.

Le Suroit, which took part in the operation that discovered the Titanic off Newfoundland in 1985, is carrying out a geological survey on seismic activity and the risk of tsunamis off the coast of eastern Sicily.

"The oceanographic vessel and the cargo ship were in the area and came to the rescue," a coast guard official in Pozzallo told AFP on Monday.

Le Suroit is operated by Ifremer, the French Research Institute for Exploitation of the Sea.

Coast guards also accompanied 200 more migrants late on Sunday from another boat to the port of Syracuse, also in Sicily, where thousands of Syrian asylum-seekers have landed so far this year.

The latest arrivals come after a refugee boat sank off Italian shores on Thursday, with more than 300 African migrants feared dead and 155 rescued.