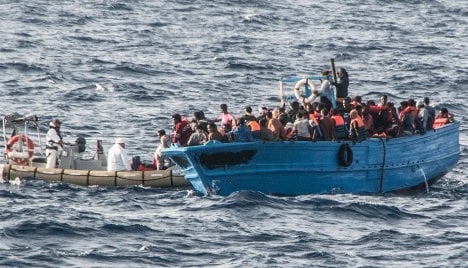 "The Mediterranean cannot remain a huge open-air cemetery. Action must be taken," France's Foreign Minister Laurent Fabius said on Sunday after a boat loaded with migrants caught fire and sank near the island of Lampedusa.

Preventing a repeat of Thursday's tragedy will top the agenda when interior ministers from European states meet on Tuesday, a day ahead of a visit to Lampedusa by European Commission chief Jose Manuel Barroso.

Some argue that radical change is now required, among them as Italy's Integration Minister Cecile Kyenge, who said the number of places in immigrant centres would be trebled from 8,000 to 24,000.

Kyenge, an Italian-Congolese politician who has suffered racist taunts from other lawmakers as the country's first black minister, told the Corriere della Sera daily the law could "no longer be punitive".

Lampedusa is struggling to accomodate 1,000 people in a holding facility with just 250 places – a situation replicated elsewhere in Italy as a new influx of migrants from Syria and Egypt has brought 30,000 arrivals since the beginning of 2013.

But with far-right parties peddling xenophobia across Europe and a tough economic climate, hopes are slim that the Lampedusa disaster will spawn a long hoped-for single EU migration policy that could avert further tragedy.

Experts in Brussels believe the sympathetic words of politicians all too often clash with the complex and politically explosive issue of illegal immigration in Europe.

"Migration policies are fragmented, inward-looking, left in the hands of member states and subject to domestic political considerations."

And pro-European politicians say a unified approach that goes beyond simple border control is required if the continent is to face up to the reality of its immigration problem.

"Border control would make up just one element of that policy," he added.

In the short term such a move is unlikely, as asylum-seekers in the European Union must appeal for help in the country through which they enter.

This system is frequently criticised by Europe's southern states, particularly Italy, Greece and Spain, which want a redistribution of asylum applications to even out the burden.

But Europe's northern states say they more than do their bit, as two-thirds of the 102,700 successful applications made to the EU in 2012 were granted by Germany, France, Britain, Sweden and Belgium.

Italy is agitating for better surveillance of the coast of Libya, where there has been a marked increase in boats containing migrants since the chaos that followed the fall of the Khadafi regime.

Thursday's incident began on a boat that had set sail from Libya.

In 2004, to tighten surveillance along its long borders, the EU set up Frontex, an agency based in Warsaw whose assets such as ships are all donated by member states.

The Commission meanwhile plans to launch a new state-of-the-art surveillance system in December "to track, identify and save" ships in danger carrying migrants.

The launch of Eurosur, which will include drones, satellite systems and high resolution cameras, will be put to the vote at the European Parliament next week.