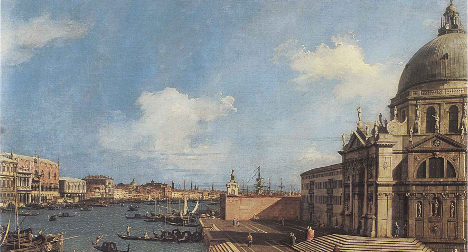 One of Venetian artist Canaletto’s finest works, L’Entrata nel Canal Grande e la Basilica della Salute (The entrance to the Grand Canal and the Basilica of Health) will go on display in November in the Medieval Abbazia di San Gregorio in Venice, where the work was originally conceived and painted.

Organized by the Fondaco Venezia, the exhibition, entitled Gero Qua (I was there), will be open 24 hours a day between November 10th and December 27th, in the exact spot where the 18th century landscape artist painted it.

There, viewers will be able to compare the painting with the original view of the Basilica that inspired Canaletto centuries ago.

Painted between 1740 and 1745, the work offers a view towards the Baroque white marble Basilica di Salute, created by architect Baldassarre Longhena as an offering for the city following the end of an outbreak of the plague.

Also visible are the Doge’s Palace, the Magazzini del Sale and the Punta della Dogana as well as a scattering of noblemen, merchants, boatmen and local gondoliers of the day.

But with ticket prices reported to be as high as €400 for a nighttime viewing, tourists aren’t expected in their hordes. Only eight viewers will be allowed at any time and visits must be pre-booked.

According to Fondaco Venezia, the painting was probably originally purchased by British nobleman Henry Grey, the Duke of Kent (1664-1740) before being passed down to become part of the art collection of Lady Lucas and Dingwall.

Centuries later in 1970, it was auctioned by Sotheby’s in London and bought by its current private owner.

Since then, it has toured around the world, featuring in exhibitions in Madrid, Rome, Milan and Paris.