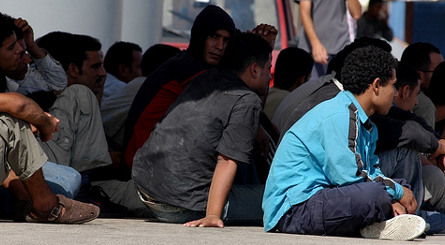 The locals of the remote fishing community on Lampedusa island rush to help every time but their patience is wearing thin as they see government funds allocated to migrants and not to them.

"Here it's the dead that keep the economy going," said Silvana Martelli, a waitress, as divers fished out bodies after a shipwreck in which over 300 African refugees are feared to have died.

"It doesn't feel like our island anymore. There's money to take care of the immigrants while the schools fall apart and rubbish piles up," she said.

As European ministers discuss the refugee crisis at talks in Luxembourg on Tuesday, this type of local resentment is a concern for governments that see the problem before them but do not want to risk being seen as a soft touch on immigration.

With a resident population of just a few thousand people, Lampedusans are sometimes outnumbered by the new arrivals before they are transferred to asylum centres on the Italian mainland.

In a corner of the harbour, the blue and red fishing boats daubed in Arabic script that are used for the landings lie discarded – a poignant reminder of the relentless human drama.

"This island has the most beautiful beaches in the world but it has become a giant cemetery for the drowned," said 57-year-old fisherman Filippo Bruno.

"Europe has to get its act together and do something before this happens again. And it will happen again," he said as he gazed out to sea.

There is no more space at the local cemetery, where the last plots have been taken up by migrants who have perished in past shipwrecks.

At the school, children this week have made a series of heartbreaking drawings of Thursday's disaster, with immigrants seen struggling to stay afloat as their ship sinks into the sea in flames.

There is sympathy for the refugees' plight but the economic crisis has also fuelled ill will against Europe's broken-down immigration system and led to accusations of preferential treatment for migrants.

Restaurant owner Ornella Gervasi fumed as she handed out plates of pasta to refugees.

"We can't abandon these poor souls," she said.

"But winter is coming and when rough seas mean the ferry cannot get through, they have provisions flown in, while we run out of the basic necessities. It does tend to brew resentment."

Lampedusa, which measures just 20 square kilometres (7.7 square miles), is Italy's southernmost point and is closer to North Africa than to the rest of the country.

Even the shipping-in of empty coffins for the bodies fished from the sea has prompted angry reactions from those who said they have had loved ones die on the mainland and been forced to spend thousands of euros to bring them home.

"We don't have the facilities here to treat many illnesses. My father had to go on a dialysis machine so we took him to a hospital in Rome. He died and we spent every last cent in bringing him back," Ornella's sister Romina said.

"We are culturally poor. There are no libraries, no bookshops, our children are ignorant," she said.

"The bible says care for your family before looking after your neighbour. The immigrants cannot come first!" she said.

Despite the resentment on this outcrop, Lampedusans have come out time and time again to rescue drowning asylum seekers from their waters and offer succour to the living with blankets, meals, clothes and toys for the children.

Many fishermen have also aided those in peril.

But as he rinsed his fishing nets, Calosero Spalma said he was afraid of a tough Italian law against those seen as assisting irregular migrants.

"Several times I've seen boats with immigrants in trouble and I've turned around and sailed off," he said.

"If they confiscated my boat, I couldn't work and my family would pay the price. I couldn't risk that.

"I feel for the poor people fleeing wars and horrors, but what can I do?"