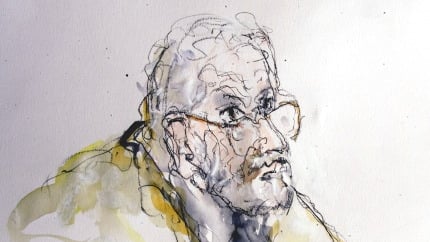 Sketch of Licio Gelli, founder of Italy's disbanded P2 Masonic lodge, during his trial in Aix-en-Provence in 1998. Photo: David Wasserman/AFP

Financial police said they were seizing Gelli's villa in Tuscany as part of an inquiry and were also probing the finances of his three children over a tax debt of €17 million.

"The case goes back to 1998 when the tax agency obtained a document from French judicial authorities showing significant assets of Licio Gelli abroad," the police said in a statement.

Gelli was the leader of the P2 Masonic lodge, an influential secret network that included the billionaire tycoon Silvio Berlusconi, politicians, magistrates, bankers and military personnel. The lodge was officially banned by a court in 1981.

Gelli was implicated in the anti-communist paramilitary organisation Gladio and the collapse of the Vatican-linked Banco Ambrosiano bank, whose chairman Roberto Calvi was found hanged on Blackfriars Bridge in London in 1982.

Gelli was convicted several times for financial crimes and has been under house arrest since 1998.

A police raid on his Tuscan estate, Villa Wanda, in 1982 found 179 gold ingots weighing 168 kilogrammes (370 pounds) hidden around the property.