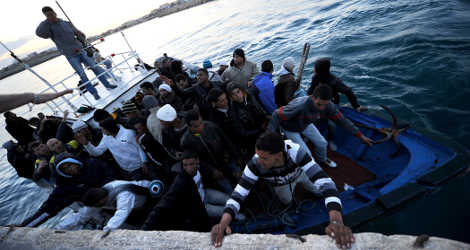 The sinking killed more than 30, most of them women and children, when the boat packed with people desperate to reach European shores went down off Malta near the Italian island of Lampedusa, according to officials.

It came just over a week after a similar tragedy killed more than 300 Africans in the deadliest refugee disaster to date in the region, prompting the European Union to call for sea patrols to cope with the flood of migrants knocking on its doors.

In Friday's sinking, a boat carrying some 230 refugees capsized in rough seas around 100 kilometres (60 miles) south of Lampedusa and 110 kilometres from Malta.

Thirty-three people, including infants and children, are known to have died as a result, according to a Maltese military source. Some 143 people have so far been rescued, an AFP correspondent said.

European Union Commissioner for Home Affairs Cecilia Malmström said she was following the rescue operations "with sadness and anxiety" and praised Italy and Malta for their swift response.

"These new horrible events are happening while we still have the shocking images of the tragedy in Lampedusa in our minds," she said, adding that the latest disaster highlighted the need for expanded search and rescue operations "to better detect and assist boats in distress".

The Commission has been urging EU states to pledge planes, ships and funds for EU border guard service Frontex, whose budget has been cut.

Italian Prime Minister Enrico Letta called the latest tragedy "a new and dramatic confirmation of the state of emergency".

"Italy and Malta cannot be left all alone, this is a European problem," said his Maltese counterpart, Joseph Muscat, who spoke with Letta by phone.

The migrants in Friday's disaster alerted the authorities using a satellite phone when their boat got into difficulty in Maltese waters.

The boat, bound for Lampedusa, capsized after those aboard attempted to catch the attention of a military aircraft flying overhead by gathering at one end of the vessel, the Maltese navy said.

The sinking came as Italian divers found another body from last week's refugee shipwreck off the coast of Lampedusa, raising the death toll in the tragedy to 312.

Only 155 survivors were rescued out of an estimated 500 people, most of them Eritreans and Somalis, on the boat which departed from Libya.

The disaster has shown up the EU's asylum policy, which has been criticised for being overly restrictive and forcing refugees to resort to desperate measures to reach Europe.

Italy has appealed to EU states for help in coping with the thousands that are washing up on its shores every month, and wants migration to be put on the agenda of summit talks in Brussels at the end of the month.