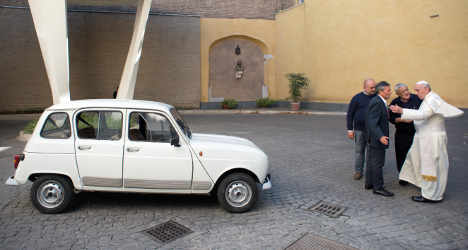 Pope Francis was delighted when an Italian priest gave him an old Renault 4 to drive around in. Photo: AFP/Osservatore Romano

Until recently, a cardinal in Rome would head to his favourite restaurant every day for lunch dressed in his expensive robes.

But one day, the waiter noticed he was wearing his plain clerical suit.

“When asked why, he said 'Pope Francis',” a source with knowledge of the Vatican told The Local.

With Rome hosting the centre of the Catholic Church, it’s not unusual to see cardinals strutting around the Italian capital in their full attire – an outfit which sets the church back an estimated €5,000 – nor is it rare to see a priest wearing designer sunglasses.

The cardinal has taken the message of modesty from his boss seriously, but the same cannot be said for Franz-Peter Tebartz-van Elst, the bishop of Limburg in Germany, otherwise known as “bling bishop”, who last week sparked a furore after it was revealed he squandered €31 million on renovating his home.

Since being elected in March, the humble Pope Francis has made an impression with his symbols of modesty, travelling in an old Fiat and eschewing a lavish apartment for a basic guesthouse.

He has also preached regularly about priests and nuns living more modest lives.

Just weeks before the story about Germany’s bling bishop – who spent €15,000 on a bathtub – broke, the pope told newly-named bishops in Rome that “we pastors must not be men with a princely mindset”. He also recently said, ““It hurts me when I see a priest or a nun with the latest model car. You can't do this…cars are necessary. But take a more humble one. Think of how many children die of hunger and dedicate the savings to them.”

But with some of Rome’s most expensive properties being collectively owned by priests and nuns, who are also ferried around in the pool of plush cars funded by the Vatican, just how much of an impact will his message have?

Tina Beattie, a professor of Catholic Studies at the University of Roehampton in London, tells The Local that with the Catholic Church being “as diverse in its members as humanity itself”, it is also a place “full of saints, sinners, rogues and scoundrels”, just like anywhere else. Some of the ordained priests, bishops and nuns will not be able to resist the deadly sins of “greed, pride, lust and gluttony”.

“We might not be surprised, but we are right to be disappointed,” she says.

“Today, many of us reject the idea that ordained life belongs to a higher order of spirituality than the lives of the ordinary faithful, but we still look to those who have consecrated their lives to God to be exemplary models of Christ-like service and sacrifice.”

In this respect, she says that the Pope’s call for those ordained to lead more simple lives is a “profound challenge”.

“And it should be a challenge for all of us,” she adds.

“Pope Francis is leading by example, and a different world is opening up within the church, as it begins to shed its baroque liturgical extravaganza of velvet, lace and incense, and its sumptuous papal accoutrements. His example calls us all to examine our lives, religious and laity alike, and to differentiate between our legitimate needs and our insatiable wants.”

Despite the extravagance in some corners, Beattie believes the majority of those within the Catholic Church are already adhering to the Pope’s message.

“I have met very few priests, bishops or religious sisters who are guilty of extravagance,” she says.

“The vast majority are either living modest and dedicated lives of service to God's people, or are living in radical solidarity with the poor…They do a great deal, but their 'doing' is primarily about being with and being for others, rather than being for themselves.”

She also says anecdotal evidence suggests that women’s religious communities live less lavishly than some of the men’s, although there have been times in the past when convents have been "revamped" due to nuns spending frivolously.

But whether the big spenders will take heed of the Pope's message, only time will tell.

Paul Murray, a professor in the department of theology and religion at Durham University in the UK, says “actions speak louder than words”.

“As such, the most effective way to preach and bear witness to the Gospel is through authenticity, integrity, simplicity, truth and love,” he adds.