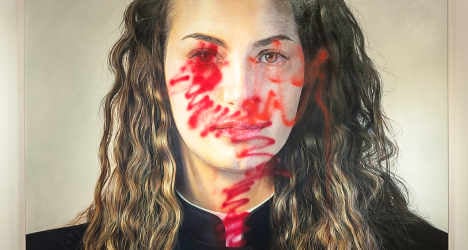 One of the paintings attacked at Galleria L’Opera. Photo: Sebastian Luciano

Galleria L’Opera in central Rome was attacked on Wednesday evening, when four men spray-painted over art works each valued at €12,000, artist Gonzalo Orquín told The Local.

The gallery was open at the time and the attackers were seen by a student assistant, before running off, Orquín said.

The three art works damaged were part of an exhibition which had come under the spotlight for a series of photos by Orquín, which showed same-sex couples kissing in churches. As The Local reported in September, the Vicariate of Rome, part of the Vatican, threatened the gallery with legal action over the photographs which it deemed offensive.

As a result, Orquín decided to cover up the photographs and they were not uncovered by the vandals.

But the artist has little doubt that the attack was linked to his controversial photography project.

“I imagine it was initiated because of my kiss work…Italians are tremendously homophobic,” Orquín told The Local. “There are a lot of blogs that have picked up on the news of the kisses, and if you read the comments, you will shudder”

“I imagine it was a group from the right; there are number in Rome that beat up gay people,” the artist said.

The three paintings attacked include one by Orquín depicting a newlywed straight couple resting on a bed.

A painting struck with “particular fury”, according to a statement by the gallery, is of a woman wearing a clerical collar. The canvas, by Mauro Maugliani, highlights the debate over whether women can be priests. Just last month a Catholic priest in Australia was excommunicated, reportedly for his support for female priests.

The third work attacked is a painting of a dilapidated sofa, by Luis Serrano, while other pieces were in another part of the gallery and so harder to access.

Orquín is unsure whether the art works can be restored, due to the invasive nature of spray paint on fresh oil paint.

But he is confident that the vandals will be found, as he said one had his face uncovered and there are a number of CCTV cameras in the area.

Don’t want to miss a story about Italy? – Then join The Local Italy on Facebook and Twitter. 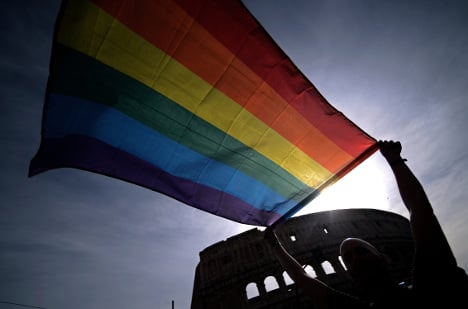