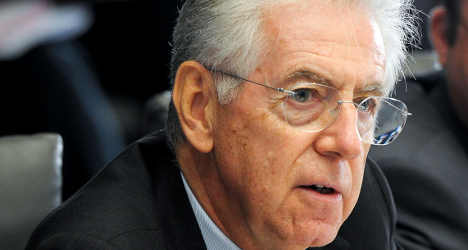 Mario Monti was prime minister of Italy from November 2011 to April 2013. Photo: Friends of Europe/Flickr

“I can only interpret the statement of the ‘11 plus one’ senators like a motion of no confidence,” Monti said, after a group of SC members released their response to the government’s budget separate to Monti’s own.

Italy’s draft budget, which aims to reduce the country’s deficit to 2.5 percent next year, was approved on Tuesday.

Responding to the proposals, Monti urged the coalition government to “tackle the reforms [and] overcome conservative resistance”. He asserted that the SC’s position in the government depends on the measures taken by the coalition.

But a statement by a group of SC senators followed, in which it gave “unconditional support to the government”, Monti said on the SC website. Such a break from the party line was enough for the former prime minister to decide he lacked full backing from its members.

In tendering his resignation, Monti said that Alberto Bombassei, SC's vice president, would take over until a new party leader is found.

But a replacement could be difficult to find, as Monti founded the party after being persuaded to stand in February’s national election. Politicians signed up to SC under the ‘With Monti for Italy’ banner, suggesting they may lack direction without the party leader.

Monti served as prime minister from November 2011 until April 2013, with the last two months of his tenure being as 'caretaker' after politicians battled to form a coalition after inconclusive elections.

He was sworn in along with a cabinet of technocrats after Silvio Berlusconi resigned as prime minister due to the country’s dire economy.

Monti, nicknamed “Super Mario” for his role as EU competition commissioner, was praised for setting the country back on course.

After initial support, however, the economist’s urgent action made him unpopular among Italians, who bore the brunt of the austerity measures. As a result the ‘With Monti for Italy’ group gained just 10.5 percent in the national election.