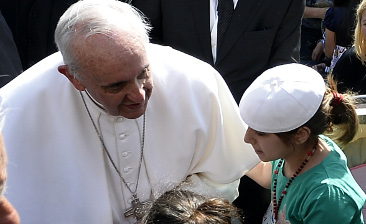 The name Francis has crept to the top of the list from fourth place, and now eclipses Giuseppe, Antonio and Giovanni, according to a report compiled by Seat PG Italia in cooperation with Enzo Caffarelli, a professor at Rome Tor Vergata University.

“Francis is the most popular name among newborns in 2013 and the contribution of Pope Bergoglio to spreading the name is very evident,” Caffarelli said.

When he was elected Pope in March, Jorge Mario Bergoglio opted for the name Francis in tribute to St Francis of Assisi. The new Pope said he chose the name because St Francis was “a man of peace, a man of poverty, a man who loved and protected creation.” He is also the first Pope to have picked Francis, a name unheard of until before the 13th century.