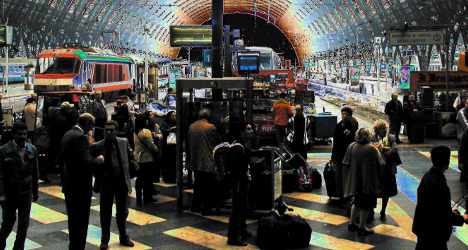 The Syrians are trying to reach other European countries from Milan. Photo: flikr/Flickr

Dozens of migrants are turning into hundreds at the city's central train station, their attempts to reach longed-for destinations in northern Europe thwarted by stepped-up border controls.

Many of them landed on the Italian island of Lampedusa, where twin shipwreck tragedies this month killed at least 400 migrants, and have since gradually made their way up the peninsula.

"We left Homs five months ago," said a 29-year-old woman, who is camping out with her husband, 35, a construction business owner from the devastated Syrian city, and their two daughters, 10 and 12.

"We passed through Jordan, Egypt and Libya where we lived for three months," she said, speaking to AFP through an interpreter in Arabic.

"We arrived on Lampedusa on October 3rd" – the same day that at least 364 fellow asylum seekers from Eritrea and Somalia on a different boat drowned.

One woman who arrived at the station with her husband gave birth on the boat to Lampedusa. The family have been put in temporary housing in Milan.

Local charities have rushed to help, distributing hot food at meal times and providing clothes and blankets. Milan city hall on Thursday set up a special "crisis unit" to deal with the situation.

"The problem is exploding here at the central station," Alberto Sinigallia, the head of one of the charities, Fondazione Progetto Arca, told AFP.

"The influx started about a fortnight ago. Until the day before yesterday, it was only 30-40 people arriving per day. They spent the night here and left the next day," Sinigallia said.

"But since then the borders are being closed in Switzerland, Austria and France. We don't know what will happen tomorrow but today people are still coming back from the borders," he said.

He said there were currently 150 Syrian asylum seekers living in the station, but by Friday he expected their number to rise to up to 220.

The father of the Syrian family said they were detained by Austrian police as they were trying to reach Germany from Austria by train with other Syrians and they were all sent back to Italy.

The man said Austrian police had hit him and that some money that the family had stored up disappeared during their detention in Austria – a claim that could not be independently verified.

Under EU rules, asylum-seekers have to remain in the first European country they enter while their application for asylum is being considered.

"Before they wanted a new life and they were upbeat. Now their money has gone and they have been sent back to a country they do not want to be in so morale is very low," Sinigallia said.

Gabriella Polifroni, a spokesperson for the Milan city hall press office, said: "At the beginning we tried to put them up in hotels and apartments but they do not want to stay in Italy or in Milan.

"We cannot force them to stay," she said.

Sinigallia said: "These are people who have suffered a lot, who have a huge desire for normality. They have a lot of dignity."