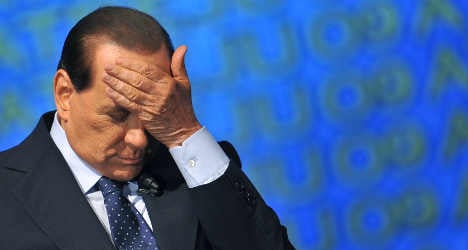 The ruling is part of the tax fraud case against the billionaire tycoon — his first ever definitive criminal conviction — in which he faces a year of community service or house arrest.

The 77-year-old Berlusconi was not present at Saturday's hearing and his defence lawyers have the right to appeal the verdict, although it was not immediately clear whether they would.

"This is the latest piece in a mosaic that aims to eliminate the leader of 10 million Italians from the political scene and is destined to fail," said Renato Schifani, the chief senator from Berlusconi's People of Freedom party.

In order for the ban to come into force, it has to be approved by the Senate parliamentary chamber where Berlusconi, who has repeatedly protested his innocence in all the cases against him, has a seat.

Banishment would be a humiliation for Berlusconi, who has been in parliament ever since the media and construction magnate first entered politics in 1994 and became a headline act.

His ejection from parliament is in any case already under discussion because of a new law approved last year against parliamentarians with criminal sentences of more than two years.

That law would also ban Berlusconi from running for office for six years although a Senate vote is also required in that case and his lawyers have appealed to the European Court of Human Rights over the law, even though lawmakers from Berlusconi's own party had approved it.

The supreme court on August 1 turned down Berlusconi's second and final appeal in the case but said another court should decide on a ban from parliament of between one and three years.

Prosecutors at Saturday's hearing had requested a two-year ban while Berlusconi's lawyers had asked for the minimum one year.

There is concern that the ruling could re-stoke political tensions in Italy's uneasy right-left coalition that had abated since Prime Minister Enrico Letta won a confidence vote in parliament against a challenge from Berlusconi on October 2.

"I think this country needs anything but political instability," Giorgio Squinzi, leader of the Confindustria employers' association, said at a conference after Saturday's ruling.

"The markets react immediately and we have seen that in the past few weeks," he said.

Italy is struggling to shake off a two-year recession that has pushed unemployment to record-high levels, forced thousands of businesses to shut and led to steep budget cuts.

The case revolved around Berlusconi's media empire and included a prison sentence of four years that was immediately commuted to one year because of an amnesty rule in place and will be served as house arrest or community service because of his age.

Berlusconi has applied for community service in Rome where he is resident but a formal decision on whether and where he will do it requires two further court hearings which have not yet been set.

Berlusconi is appealing a seven-year sentence for having sex with an underage 17-year-old prostitute and abuse of office when he was prime minister.

He is also appealing a one-year sentence for leaking a secret police wiretap in a newspaper owned by his family to damage a political rival.