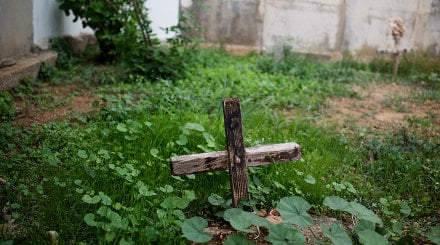 An unidentified tomb of an asylum-seeker inside the cemetery of Lampedusa. Photo: Roberto Salomone/AFP

"We have lost wives, children. Why won't the authorities let us attend the ceremony, to grieve and say goodbye?" one of dozens of Eritreans protesting told SKY TG24 television.

The Italian government had promised a state funeral for those who drowned after their 20-metre boat caught fire, capsized and sank within sight of the shore on October 3rd, killing 366 people.

But with over 200 of the victims already buried in cemeteries in the Sicilian city of Agrigento, a ceremony will be held in their memory instead.

In Rome, some 350 Eritreans gathered in prayer, holding candles and banners reading "you will always remain in our hearts".

"Lampedusa is hope, but Lampedusa is also a tomb for many," one mourner told La Repubblica video.

Monday's ceremony will also remember those killed just days after the first shipwreck, when another heavily laden boat sank off Malta.

At least 36 of the Syrian refugees on board drowned, though the Maltese government has said the final toll could be as high as 200.

Despite the tragedies, boats laden with people continue to arrive. The United Nations refugee agency says 32,000 asylum seekers have landed in Italy and Malta so far this year.

Most leave from an increasingly lawless Libya and arrive on the tiny Lampedusa, where the local refugee centre is often severely overcrowded.

Immigration charities estimate between 17,000 and 20,000 migrants have died at sea trying to reach Europe over the past 20 years, often crossing on rickety fishing boats or rubber dinghies.

Italy has appealed to EU states for help in coping with the refugees washing up on its shore and wants migration issues to be put on the agenda of summit talks in Brussels this week.