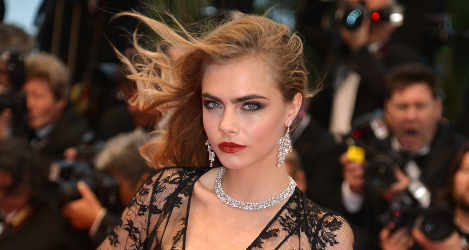 A story published on Monday in the newspaper Il Mattino said model Delevingne will play Amanda Knox in the upcoming film, The Face of an Angel.

But a spokesperson for London-based Revolution Films, the production company behind the film, told The Local that the story has been "totally misreported".

Although Delevingne will act in the film, she will play a student who meets fictional filmmaker Thomas rather than a woman accused of murder. German actor  Daniel Bruhl will play Thomas while British actress Kate Beckinsale has been lined up to play a journalist reporting on the crime.

"The case in our film is fictional. There is no Knox character and so no-one is playing Knox,” the spokesperson said.

Knox and her Italian ex-boyfriend Rafaelle Sollecito are currently being retried for the murder of Kercher, who was killed in the house she shared with Knox in Perugia on November 1st 2007.

The film, directed by Michael Winterbottom and due for release later this year, is based on the book entitled Angel Face by journalist Barbie Latza Nadeau. The book focuses on the Kercher case, highlighting inaccurate media coverage.

“The film is about moral qualm and how to go about making a film about a famous case,” the spokesman added.

“It’s more about the fascination that we have in society with these sensational cases and the way the media handles it. The case in our film is fictional and has nothing to say about the real [Kercher] case.”

The main character, Thomas, travels to Siena to make a film about the murder of a foreign student in the Tuscan city. It opens up with his arrival in the city, while the murder case is ongoing in court, and does not feature a crime scene.

Revolution Films will work with a local crew, many of whom recently worked on Winterbottom’s The Trip to Italy.

The retrial of Knox and Sollecito began in Florence in September and is expected to continue for many months. The duo were acquitted of the crime in 2011, although Italy’s highest court in March ordered a retrial citing "numerous examples of shortcomings, contradictions and incoherencies" in the case.