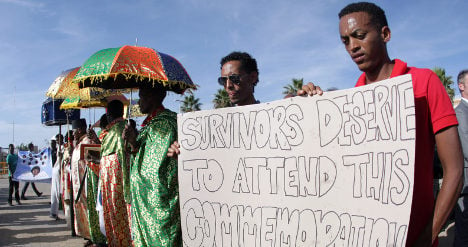 The majority of the victims of the October 3rd tragedy were from Eritrea, and dozens of their compatriots travelled to the Sicilian town of Agrigento from the Italian mainland to take part in the short, multifaith ceremony on the quayside.

Wearing traditional costumes, they paid homage to the 366 people who drowned when their 20-metre boat caught fire, capsized and sank off the Italian island of Lampedusa.

The 155 survivors, many of whom had family members among the dead, gathered along a stretch of cliff on Lampedusa to pray in silence and throw flowers into the sea.

They had earlier held a sit-in at the island's refugee centre, demanding to be taken to Sicily to join in a memorial ceremony for the victims.

"We have lost wives, children. Why won't the authorities let us attend the ceremony, to grieve and say goodbye?" one of dozens of Eritreans protesting told SKY TG24 television.

The Italian government had promised a state funeral for those who drowned, but the dead have already been buried in various cemeteries throughout Sicily, mainly in unmarked coffins.

The government's handling of the affair has sparked angry reactions from those who say survivors were not given enough time to identify and mourn their dead.

Lampedusa Mayor Giusi Nicolini, who boycotted the ceremony, called for October 3rd to become a memorial day "to remember all migrants who have died at sea trying to cross the Mediterranean."

"The so-called activists who shouted 'assassins' are those who want open borders and freedom for people smugglers," Alfano said.

He had earlier rebutted criticisms, saying Italy had "assured assistance to the survivors and a dignified burial to the dead."

"It is now time to wage war on the merchants of death," he said, referring to traffickers loading refugees into crowded boats for Europe.

Prime Minister Enrico Letta was in talks with his Greek counterpart Antonis Samaras on Monday and did not attend the ceremony.

He said it was significant that the ceremony in Sicily took place while efforts were underway "to get answers that measure up to the dramatic questions posed by the tragedy."

"At the next European Council we will stand firm on the theme of immigration and will not accept superficial advice," he said.

No let-up in migrant influx

Italy has appealed to EU states for help in coping with the refugees washing up on its shore and wants migration issues to be put on the agenda of summit talks in Brussels this week.

In Rome, some 350 Eritreans gathered in prayer, holding candles and banners reading "you will always remain in our hearts".

"Lampedusa is hope, but Lampedusa is also a tomb for many," one mourner told La Repubblica video.

Monday's ceremony also remembered those killed just days after the first shipwreck, when another heavily laden boat sank off Malta.

At least 36 of the Syrian refugees on board drowned, though the Maltese government has said the final toll could be as high as 200.

Despite the tragedies, boats laden with people continue to arrive. The United Nations refugee agency says 32,000 asylum seekers have landed in Italy and Malta so far this year.

Most leave from an increasingly lawless Libya and arrive on the tiny Lampedusa, where the local refugee centre is often severely overcrowded.

Immigration charities estimate between 17,000 and 20,000 migrants have died at sea trying to reach Europe over the past 20 years.