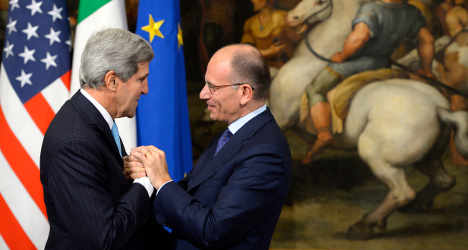 The weekly said the espionage concentrated on three underwater fibre optic cables with terminals in Italy: the SeaMeWe3 and the SeaMeWe4 in Sicily and the Flag Europe Asia crossing the country.

"In this mass collection, our secret services had a role," the weekly said, citing journalist Glenn Greenwald, who sparked global controversy with his revelations based on US leaker Edward Snowden.

GCHQ's selection of Internet communications and phone calls included diplomatic, financial and military information and was then passed to the US National Security Agency (NSA), the report said.

The spying was on "European governments, including the Italian one", Greenwald was quoted as saying.

On Wednesday, Italian Prime Minister Enrico Letta held talks with US Secretary of State John Kerry in Rome, during which he asked for an explanation over recent reports that the US National Security Agency spied on Italian international communications. Kerry is reported to have said that he would look into the allegations.