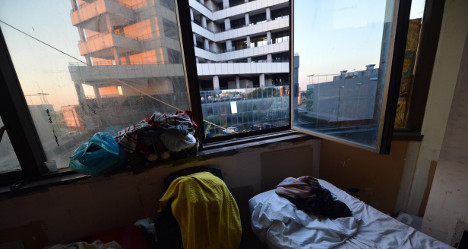 View of a bedroom at Salaam Palace, where 1,250 refugees live. Photo: Gabriel Bouys/AFP

"We were only looking for peace," said Mahad, 27, who fled from Somalia to Italy seven years ago. He is part of a group of squatters who try to keep the peace among the desperate souls who long to be able to move to other parts of Europe.

"Living here is no home. There are problems with alcohol, fights. Some here have gone mad," he said.

Fiore, a 29-year-old Eritrean woman with a son 16 months old, described it as "a nightmare from which you can't shake free."

Refugees rustle up plates of African staples in their rooms, where curtains separate mattresses and blankets become prized goods as winter falls.

"They don't know where else to go. They are victims of the system," said Lorenzo Chialastri from Catholic charity Caritas.

Two shipwrecks that saw over 400 refugees drown this month near the Italian island of Lampedusa as they tried to reach Europe have drawn global attention to what Prime Minister Enrico Letta has described as an "immigration emergency", which has turned the Mediterranean into a "sea of death".

Survivors of the October 3rd shipwreck, many of whom lost family members when their boat caught fire and sank, are now forced to sleep in unsanitary conditions at Lampedusa's overcrowded centre, where 800 migrants fight over 250 beds.

Some of the 4,000 migrants at the Mineo centre in Sicily, dubbed "Solidarity Village", rioted this week over the snail-pace examination of asylum requests, burning mattresses, throwing rocks at passing cars and clashing with police.

Italy has asked the European Asylum Support Office (EASO) for help in upgrading its centres, training staff and implementing the Dublin regulation, which state that asylum applicants in Europe must stay in their first country of entry.

'Lives are at stake'

Italy and the European Union have pledged millions of euros in extra funds and more refugee beds but associations and charities say it is not enough.

Around 10,000 people request asylum each year in Italy, but many also try to dodge controls to apply for asylum in other parts of Europe.

A bloated system means those lucky enough to be granted protective status are forced to give up their bed to incoming asylum seekers and end up on the streets, looking for shelter and work.

"Many of these people are traumatised from events in their home countries. The police escort them out of the centres and from then on they are on their own," said Chialastri, who runs Caritas' migrant counselling centre in the Italian capital.

"Refugees need to know what will become of them, they need concrete support. Lives are at stake."

A fierce recession in Italy means finding employment is near impossible and many attempt to travel to northern Europe, lured by the prospects of a roof over their heads, a stronger labour market and a better social assistance system.

Those registered on entry to Italy are routinely sent back – unless the conditions and lack of assistance are seen to violate their human rights.

Courts in Germany have ruled against the practice because of "the danger of being exposed to inhumane or degrading treatment", fears echoed in a recent report by the Swiss Refugee Council.

Eighteen-year-old Adam from Eritrea arrived at "Salaam Palace" just six months ago after a gruelling two-year journey through Sudan, Libya and across the Mediterranean to Lampedusa.

He said he was too scared to try to travel elsewhere in Europe. "It's very dangerous, but here there is no job," he said, smoking in a tracksuit and sandals on the steps outside.

"Living here is very difficult, we have nothing," said Ahmed from Somalia, 27, who attempted to start a new life in Norway and Sweden but was sent back twice. He now cares for a one-year-old daughter born in the ramshackle squat.

"Life was better when I lived in Libya under Qaddafi than it is in Italy now," said Ahmed, who has an occasional job unloading goods.

"If I lose this job I'm thinking of becoming a pirate in Somalia, at least they make money and can provide a home for their family," he said.