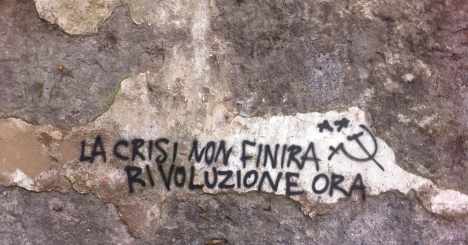 Two years into a recession and with a fragile coalition government at the helm, often too busy squabbling to implement policy, many Italians have had enough.

Taxes remain high yet cuts are commonplace, hitting everything from housing to education. As a result, thousands of Italians decided to take their frustration to the streets, in a last-ditch attempt to call the government to action.

“We pay taxes and we want services – healthcare and schools, not the railway,” a protester from Turin told The Local. The man, who declined to give his name, had travelled to Rome as part of the ‘No TAV’ group which opposes a high-speed rail line through the Alps.

While the railway itself will have an environmental impact as it carves through the Susa Valley, linking Turin and Lyon, the protester was more concerned by the cost of the project. The money should be directed towards schools, he told The Local, where textbooks are in short supply as education funds dry up.

Through the thronging crowds ran further frustration, focusing on multiple issues including health. "The healthcare system is not free; poor people always have to pay something," said Cristina Sipescu. The government was better under Mario Monti than the current leadership, she added.

Some took on a more revolutionary approach, weary with the political elite and economic crisis. "We're here to change the capitalist system that we have to live with every day," said protester Silvia, from the southern Campania region.

People fighting for the right to housing were out in force during the march. The red “La casa si prende” slogan (below), calling on people to reclaim housing, appeared on flags, banners and walls.

With unemployment still at 12 percent, many people have turned to squatting in abandoned buildings as they can no longer afford their rent or mortgage. Some buildings are taken over by students unable to pay rent while they study, while others are filled with families.

Vanessa, a protester pushing a pram along Rome’s Via Merulana, said she too had been forced to move into a squat. “We want council housing,” she told The Local.

After the crowds made their way through the capital, a few hundred decided to stay on the streets and camp out on a busy road at Porta Pia.

The tents stayed up until Tuesday, when the protestors met Transport and Infrastructure Minister Maurizio Lupi to talk about housing rights.

Ahead of the meeting, Lupi tweeted that the topic is now a government priority. A €140 million housing plan would soon be introduced, the minister said, while €40 million will be set aside to help recently-unemployed people who are temporarily unable to pay rent.

As thousands of Italians took to the streets, they were joined by a number of communities including the Roma and migrants from East Africa.

"We don't have homes. I've been here for 30 years, I'm a citizen of Rome but they say we have to live in camps outside the city," said Aidemi Dudi, originally from Serbia and part of a Roma community.

A 2012 government report admitted that the camps policy, in which people are “forcibly compelled to live in areas at the margins of urban centres”, has fueled the housing problem.

Italy’s immigrant population also attended the Rome march to campaign for refugee rights. “The Dublin law must be respected” read one sign (below), referring to the EU law which governs the way countries manage asylum seekers.

"We don't have homes or jobs. We are refugees but we don't have refugee rights," said Seltene Asefaw, an Eritrean who arrived in Italy by boat two years ago.

Prime Minister Enrico Letta has admitted Italy is struggling to cope with the number of refugees arriving. On Tuesday, he made an appeal to the EU for a regional approach to the issue, following the deaths of over 400 migrants who drowned when their boats sank off the coast of Italy.

Asefaw is was one of 1,000 Eritreans in Rome and part of an immigrant community that wanted to become part of Italian society. “We want integration; many Eritreans have been here for 20 years are are not integrated with the people of Rome," he told The Local.