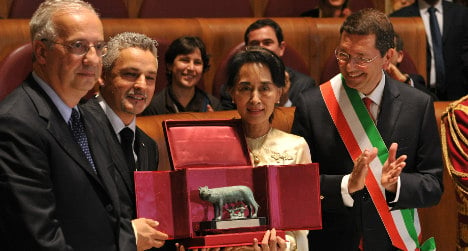 The Nobel peace laureate was given the citizenship in 1994 but spent most of the past two decades under house arrest in Myanmar which meant she was unable to collect her award.

On Sunday Rome's mayor Ignazio Marino said on his Twitter account: "19 years have passed since the conferment of honorary citizenship to Aung San Suu Syi. Finally today we can award it to a free woman."

At a ceremony at the town hall, a modest Suu Kyi denied that she had done anything special, saying only that she had made "choices" in her life and "not sacrifices".

She will also be granted an audience with Pope Francis before heading to the city of Bologna to accept another citizenship.