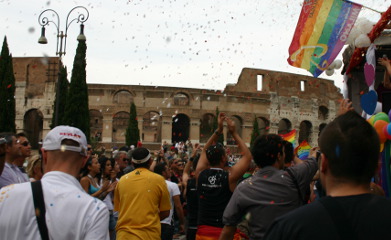 The man fell to his death on Saturday night on via Casilina from the 11th floor of an apartment block in the suburbs of eastern Rome.

In a suicide note in which the 21-year-old admitted to being gay, he wrote: “Italy is a free country but homophobia exists and whoever has these attitudes has to face their own conscience”.

If police confirm that homophobia is behind the suicide this would make it the third tragedy of this kind in a year in the Italian capital.

Last November, a 15-year-old student at the Scientific Liceo Cavour in central Rome hung himself with a scarf.

And this summer, another teen aged 14 took their life in the Torraccia neighbourhood of north-eastern Rome.

“I’m homosexual, no one understands my tragedy”, wrote the 14-year-old before throwing himself off the balcony of his home.

In May, a 16-year-old student jumped from a third-story window of his school during lunch break in the Marconi area of southern Rome.

Fortunately, a car cushioned the fall and the boy escaped with a fractured ankle.

Commenting on the latest tragedy in an interview with Corriere della Sera, Fabrizio Marrazzo, a spokesperson for Italy’s Gay Centre, said: “The suicide of a boy of 21 in Rome is another tragic incident. We are waiting for more information, but as we find out that it involved a boy who is gay, we are facing the umpteenth case. Suicides or suicide attempts by young homosexuals are alarming facts.”

He added that the centre’s Gay Help Line receives around 20,000 calls every year and that, according to their statistics, one in ten gay people have considered suicide in their lifetime.

On Wednesday, gay rights activists will protest in the capital in a bid to put pressure on the parliament to pass a law criminalizing homophobia.

“After the third case of this kind in Rome in the last few months, we want to call attention to the institutions of our society, to schools and to Parliament that still hasn't passed a law against homophobia worthy of the name,” said Marrazzo.

In September, a bill was passed by the lower house that aims to see a 1993 anti-discrimination law extended to crimes motivated by homophobia or transphobia.

While the bill has now been passed by the lower house, Silvio Berlusconi’s People of Freedom (PdL) party said it would fall in the Senate vote.

During a debate on the bill in September, the Five Star Movement (M5S) staged a kissing protest in parliament calling for more rights for gay people.