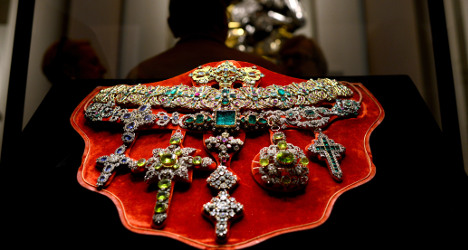 A necklace of Saint Januarius, in gold, silver and precious stones created by Michele Dato in 1679 on display at the exhibition. Photo: Gabriel Bouys/AFP

"The Treasure of Naples", displayed outside the southern Italian city for the first time, boasts among other things a diamond, ruby and emerald-encrusted bishop's Mitre and a large necklace made up of jewel-studded crosses dating back to 1679.

The collection "is of incalculable worth, both historically and artistically, greater than that of the British crown jewels or the Russian imperial crown," Emmanuele Emanuele, head of the Rome Foundation organizing the exhibition, told journalists.

The jewels, golden chalices and silver statues in the collection, which opens Wednesday to the public, were donated down the centuries to Saint Januarius, Naples's patron saint.

The treasure was protected from wars or pillaging by a commission set up in Naples in 1526 after a plea to Januarius to save the city.

Naples was being hit hard by a cholera which killed 250,000 people and a vociferous Vesuvius causing 30 earthquakes a day, curator Paolo Jorio said at the exhibition's unveiling.

"The city was on its last legs, but the people of Naples knew which saint to turn to. They voted that, if Saint Januarius helped them, they would dedicate a new treasure chapel to him" in Naples' cathedral.

"They commissioned, set up, safeguarded and managed all the masterpieces that from 1305 until today have been given to the chapel, building a patrimony of 21,610 masterpieces," he said.

Down the centuries, kings, queens and noblemen continued to donate rings, pendants and candlesticks to ensure Januarius' favour.

The original Saint Januarius necklace was added to over time to include a diamond and emerald cross donated by Napoleon, as well as sapphire and gold crosses, rings and broaches donated by King Vittorio Emanuele II, Queen Maria Carolina of Austria and many others.

In 1849, Pope Pius IX, who sought refuge in Naples during an attack on the Papal States, donated a solid-gold chalice.

King Umberto I and Queen Margherita of Savoy presented the saint with a emerald-encrusted cross on their first visit to Naples in 1878.

Even those who visited the chapel empty-handed left something: Maria Jose, wife of King Umberto II, slipped a ring off her finger for the saint during a private tour in 1933.

The exhibition's other star, the dazzling Mitre, decorated with 3,326 diamonds, 164 rubies and 198 emeralds, was designed to crown a statue of the saint during processions in 1713 and was made by master jeweller Matteo Treglia.

"The emerald represents the union of the sacred with the emblem of eternity and power. The ruby represents the blood of martyrs, and the diamonds symbolise a faith nothing can shake," said gemologist Ciro Paolillo.

"The Treasure of Naples: masterpieces from the Museum of San Gennaro" runs from October 30th to February 16th, 2014, at the Rome Foundation.