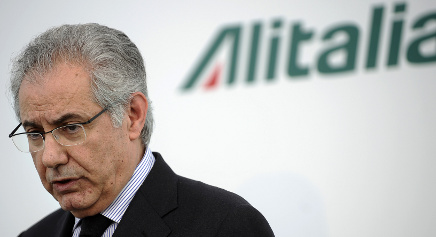 "I announce now that, at the end of the operation… I will not be available to take on new managerial appointments within the company," Colaninno was quoted as saying by Alitalia.

Alitalia had already said its top executives intend to resign once the operation is completed.

The announcement, likely a manoeuvre to get shareholders to inject funds as part of a €300 million capital increase underway by reassuring them of additional control over the airline's further restructuring.

Shareholders, including Air France-KLM which currently holds a 25 percent stake in Alitalia, have until the middle of November to decide whether or not to participate in the capital increase.

Alitalia said Intesa Sanpaolo, Atlantia and Immsi were ready to take part in the share issue.

Italian authorities have indicated that want a major airline as the principal investor in Alitalia to help engineer its turnaround.

Air France-KLM has refused to say whether or not it will take part.

Air France-KLM chief executive Alexandre de Juniac said on Thursday that since talks on recapitalisation began, the French group had been clear about requiring "strict financial, industrial and social conditions" and a "profound restructuring" for Alitalia.