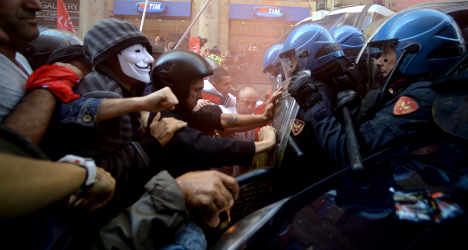 Six people were lightly wounded during the clashes, including four policemen, and several protesters were hauled off by police in riot gear.

"Today's protest was set up to call for concrete acts" from the government on housing, "but instead of that they got our their shields and truncheons," said Paolo Di Vetta, one of the organizers.

Hundreds of Italians took to the streets to claim their right to housing and protest against the eviction of those in the recession-hit country who fall behind on their rent.

They were joined by migrants and refugees, many of whom sleep in city slums because they cannot afford private accommodation.

Protesters carrying signs reading "stop to evictions and the seizure of property" shouted "for shame!" and threw eggs, fruit and firecrackers at police, who pushed them back with batons.

SEE ALSO: Rebels without a cause: why Italy is angry

Italy has been mired in a recession for two years – its longest since the Second World War – and unemployment has been rising for months.