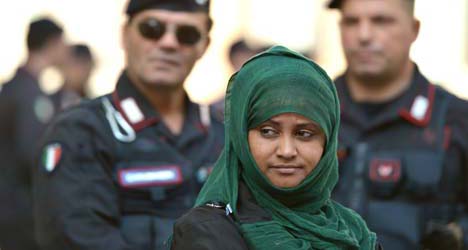 A protester in Rome calling for democracy in Eritrea. Photo: Gabriel Bouys/AFP

Don Mussie Zerai, who runs the Habeshia organisation, told journalists in Rome that some of the Eritrean translators and intermediaries working with Italian authorities to identify survivors of a deadly shipwreck in October were working for Eritrean President Issaias Afeworki's regime.

"Some are translators for the police. They are actually there to collect names, sensitive information. There are also there to spread disinformation, to defend the regime, to claim these people have fled their country for economic reasons," he said.

The information collected is then used by the regime, which has ruled Eritrea with an iron grip since independence in 1993, to fine family members left behind in Eritrea, confiscate their property or imprison them, he said.

"We have passed on names for some of these mediators to the prefecture. We want to know who they are, who are they working for? Are they double dealing? We have not yet received any answers," he said.

SEE ALSO: 'Eritreans have no choice but to leave their country'

The priest estimated that some 2,500 Eritreans have died attempting the perilous Mediterranean crossing to Europe between 2010 and 2013. He said many deaths were not recorded because they took place in international waters.

On October 3rd, a boat crammed with refugees, nearly all of whom were Eritreans, caught fire near Lampedusa island and sank, killing at least 366 people.

Zerai called on Italian authorities to open an investigation into two boats which reportedly came across the migrants as they ran into trouble on the dark seas but neither stopped to help them nor alerted the coast guard.

"There were two boats which sailed off even though those sinking were calling out for help. I have 11 witnesses who say so. No inquiry has been opened so we are seeing with lawyers what legal action we can take," he said.