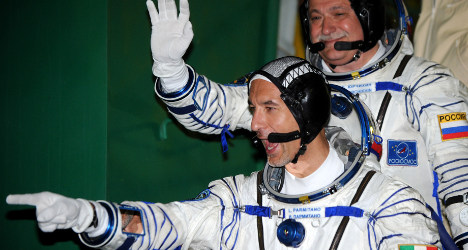 Russian flight commander Fyodor Yurchikhin and engineers Karen Nyberg of NASA and Luca Parmitano of Italy undocked their Soyuz TMA-09M spacecraft from the Rassvet module on the Earth-facing side of the station and carefully manoevred it to the Zvezda module's aft end.

The fly-around — which NASA said was last performed in July 2010 — sets the stage for the arrival on November 7th of a new crew which will bring along one of the torches Russia is using in its relay for the February 7th-23rd Winter Olympic Games in Sochi.

The addition of the new team — comprised of NASA's Rick Mastracchio and Japan's Koichi Wakata as well as Russian Soyuz commander Mikhail Tyurin — will take the number of people on board the station to nine for the first time.

SEE ALSO: The Local's profile of Luca Parmitano, the first Italian to land in space

Space officials said cosmonauts Kotov and Ryazansky will take the Olympic torch for a symbolic spacewalk on November 9th.

The Soyuz capsule is used by crew members to dock to the orbiting lab and remains attached to the station for return missions to Earth.