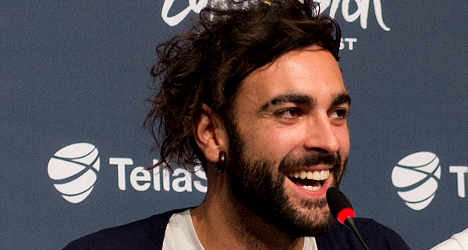 One question asked about Marco Mengoni, a musician who is not even from the Campania region. Photo: Albin Olsson/Wikimedia Commons

The candidates are due to take the exam, which will allow them to work as licensed guides, tomorrow and on Wednesday. But many have complained that the test for the Campania region – which has 4,000 possible multiple choice questions – has too many mistakes to go ahead.

“There are copious wrong responses…I am spotting so many. For example: the first pasta factory in Naples was in the 19th century, rather than the 15th century…ABSURD!” said one candidate on Facebook.

“So we have to learn the wrong answers in order to pass? How does this farce work?” asked another candidate, while one user said,“We have arrived at the greatest absurdity…by now, nothing surprises me!”

To work legally in Italy, every tour guide must pass the exam which quizzes them on everything and anything they may need to know for the job.

The controversial Campania quiz includes a question on whether the La Venere di Milo “painting” is in the Louvre in Paris or in Florence’s Uffizi gallery or Palazzo Pitti. The work, in fact, is actually a sculpture.

Another question asks how Marco Mengoni, who does not even hail from Campania, shot to fame.

Antonio Marciano, the deputy head of the regional council, said the situation was “unprecedented” and criticized the exam organizer, Formez.

He did however joke that the the candidates’ ability to pick up on the mistakes showed they are so well prepared they can correct the examiners. “They bodes well for the future of tourism in Campania,” he told La Repubblica.

Secondo Amalfitano, local director of Formez, said the criticism was unjust and argued that Marciano failed to understand the supposed “scandal” that has erupted.

“We are speaking about an absolutely normal percentage [of mistakes], in a bank of 4,000,” Amalfitano told La Repubblica.

The Formez committee met last week and agreed to take out some questions, but the exam is still set to go ahead.