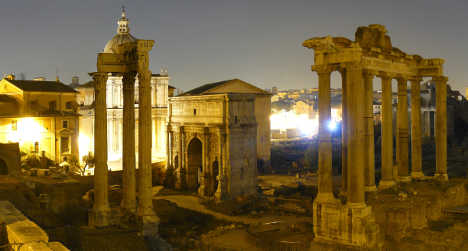 The mayor said he had spoken to three multinational corporations this week and had received offers of support from Azerbaijan and the United Arab Emirates.

“I am thinking of a discourse about philanthropy, certainly not sponsorship by big businesses which then use the image of this or that monument,” Marino told Corriere della Sera.

“If there’s a billionaire from Trenton, New Jersey or Sydney, they are welcome to come.”

After moving to restrict traffic around the Colosseum in August, the newly-elected mayor announced an ambitious plan to transform the city by reuniting its two ancient forums and ripping up the avenue that divides them.

He wants to remove the Via dei Fori Imperiali, the grand avenue created by Benito Mussolini, and create an archaeological park in the centre of the Italian capital.

But he said patronage for the Forum would be different to the €25 million restoration of the Colosseum, funded by billionaire businessman Diego Della Valle, or the €1 million provided by Japanese businessman Yuzo Yagi for the restoration of Rome’s last remaining ancient pyramid.

He also said he will also approach the European Union for funding and hold talks with the mayors of Barcelona, London and Paris about his plans.

“In my vision for the next 15 to 20 years, the birth of the archaeological park is the first step,” he said.

For centuries the Roman Forum was the political epicentre of an empire that stretched from the Middle East to the UK.

The 2,000-year-old forums in the heart of Rome were created by leaders such as Julius Caesar and the forums built by successive emperors in the later Imperial period span the Via dei Fori Imperiali that leads to the Colosseum.