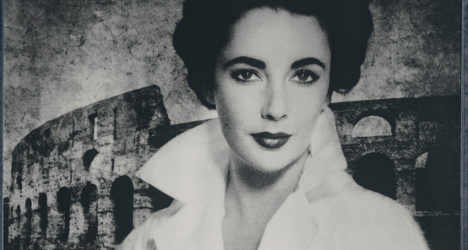 The late Liz Taylor is one of the Hollywood stars featuring in the exhibition as part of Rome's International Film Festival. Photo: Antonio Barrella/Bellissime

On first sight, the photographs in the exhibition,  called 'Bellissime. Icone di Ieri nella Roma di Oggi (The Beautiful Ones. Yesterday’s Icons in Today’s Rome)', do not appear to be too out of the ordinary: they are black and white Polaroid-style shots of 26 actresses from the 1950s, alongside some of the eternal city's most famous sights.

It is only on closer inspection that you realise the actresses have been transplanted into scenes of today's Rome, some with ancient landmarks, others presenting a dichotomy between the actress and more modern architecture.

The exhibition opened in Casa del Cinema in Villa Borghese on Thursday as part of Rome's International Film Festival, which gets underway on Friday.

CLICK HERE TO SEE TEN OF THE ACTRESSES FEATURED IN THE EXHIBITION.

Accompanying the photos is a silent film, also predominantly in black and white, made of clips of the actresses from film and fashion archives.

Stefano Dominella, who came up with the idea, explains the thinking behind the exhibition.

“It's not about nostalgia, it's about creating a postmodern Rome by bringing back some of the great international divas.”

The Italian neorealist films of the 1950s, directed by the likes of Paolo Pasolini and Federico Fellini, first brought the iconic Hollywood actresses – and international media attention – to the red carpets of Rome, sparking a worldwide fascination with Italy.

TAKE A LOOK AT SOME OF THE FILMS MADE DURING ITALY'S GOLDEN ERA.

It was also the time when Italian fashion exploded onto the international stage. This was in part due to these stars, who wore the designs of Italian stylists such as Roberto Capucci and Fernanda Gattinoni, and so became “ambassadors” of Italian fashion to the world. People wanted to replicate the look, and Milan began to overtake Paris as fashion capital of the world.

“This was the age in which 'made in Italy' was born,” Dominella, who is also the vice-president of fashion at Unindustria, added.

The pictures were taken by Antonio Barrella, who used a Polaroid camera to combine the separate images in order to retain the atmosphere of the period. Barrella calls it “a dreamlike mashup” seeking to connect Rome's past, present and future.

The process was laborious, but the aim was not to present a Rome "you always see on postcards, I wanted to portray the Rome you don't see, the mysterious Rome", Dominella said.

For Dominella , two of the photos stand out.  The first is of Silvana Mangano, the only Italian actress to appear in the exhibition. “To me, it was Silvana Mangano who brought international style to our cinema. She is elegant, fascinating and an exceptional actress.”

Mangano, a one-time winner of the 'Miss Rome' beauty pageant, starred in films such as L'ora di Napoli (The Gold of Naples) by Vittoria De Sica and Riso Amaro (Bitter Rice) by Giuseppe De Santis .

Dominella's other favourite is Bette Davis, "because we managed to insert her into a modern context".

Davis is shown in front of the abandoned gasometer, a large, metallic structure, near Ostia, a town close to Rome. “It's not the Colosseum or the Trevi Fountain, it's a strange place, but it too has become a symbol of Rome through cinema," Dominella said.

By placing these iconic and 'timeless' women in today's Rome, Dominella hopes to show that the appeal of Rome too is timeless. He says the exhibition is a representation of "hope for the future", and that by "rediscovering the age when Italy's textiles, fashion and film industries first captured the attention of the world, we can recreate it".

Although Italian cinema has receded on the world stage since the 1950s and 60s, Dominella is optimistic about its future. He says that today it is going in new directions, with the next team of directors waiting in the wings. “Paolo Virzì, Gabriele Salvatores and Paolo Sorrentino, among others, will definitely be the Fellinis of the future. They are the start of a new age. In the US, there are no young directors emerging, but here there is a new Italian cinema, and they're ready to do great things.”