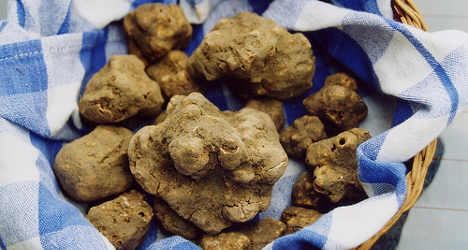 By weight the €90,000 truffle is three times more expensive than gold. Photo: Tuscanycious/Flickr

An anonymous Chinese writer, living in Hong Kong, bought the €90,000 truffle via satellite link from the Grinzane Cavour Castle in Alba, Piedmont, the event's organizer said in a statement on Sunday.

At just 950g the truffle price tag is three times that of gold, the statement said.

The truffles, likened to mushrooms, grow underground among particular trees and are foraged in Italy by a licensed hunter and a specially-trained dog. While Alba is the home of the white truffle, a number of different varieties exist and are hunted in other parts of the country under tight regulation.

Yesterday’s auction of 11 truffles also included one weighing 305g, bought as a gift for Italian-American Bill De Blasio just days after he was elected mayor of New York. The price tag and the name of the buyer were not disclosed by the organizer.

While Sunday’s buyers chose to remain anonymous, some fans of the pricey delicacy are less shy. Last November New York rapper Jay-Z hit the headlines with a €15,000 truffle spree in Alba.

The latest auction, at the start of the truffle season, suggests the super rich remain committed to the pricey delicacy despite the economic crisis.

The new purchases can be shaved onto pasta, a risotto or used to infuse honey or pesto.