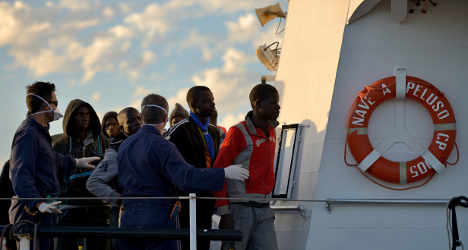 Migrants are rescued off the Italian coast. Photo: Filippo Monteforte/AFP

"We suggest that all possible options of an EU-led CSDP (common security and diplomatic policy) operation against trafficking of human beings across the Mediterranean should be explored," the Italian foreign and defence ministers, Emma Bonino and Mario Mauro, said in an October 24th letter.

They said such an operation should aim "to discourage criminal organisations, to bring traffickers to justice" and should be staged in collaboration with coastal nations and international bodies.

EU leaders have come under heavy fire over migration after some 400 refugees fleeing conflict in Africa and Syria perished in waters off the Italian coast last month.

The two Italian ministers said a maritime EU-led operation against human traffickers could draw inspiration from its successful campaign against piracy off Somalia, EUNAVFOR ATALANTA.

The request was currently being examined by the EU's executive and was expected to be discussed by the bloc's 28 foreign ministers over lunch on Monday, EU diplomats speaking on condition of anonymity said.

At a summit last month EU leaders vowed to take action to prevent more deaths but failed to come up with any concrete answers, pushing back the issue to fresh summits in December and in June 2014.

Countries on the bloc's southern fringe – Cyprus, Greece, Italy, Malta, Spain, and Croatia on the EU's Balkans frontier – complain they cannot cope with the boatloads of would-be immigrants and have pleaded for help from wealthier neighbours in northern Europe.