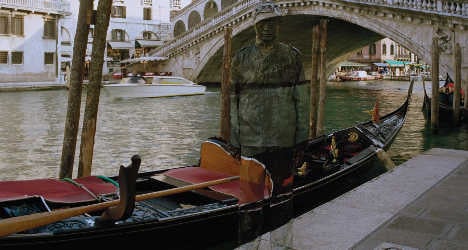 After being painted, Liu Bolin blends into the Venice scenery. Photo: Liu Bolin

You could have walked past invisible Liu Bolin without even noticing. Since 2005 the artist has been painted meticulously to blend into the environment, be it a supermarket shelf, a park, or Venice’s Piazza San Marco.

The idea is simple: he stands still while fellow artists paint him to match the real-life canvas behind him – but the process takes hours. What started as a project to highlight the destruction of his Beijing art studio after he was evicted by the government has since gone global, with Liu performing his invisibility trick everywhere from Paris to New York.

The artist chose Venice for the project because it is both unique and under threat, he tells The Local.

“Venice is a very beautiful place, near the ocean and the view of it is unique. What’s more is that with the melting of the polar ice caps, there’s a prediction that such a beautiful city will disappear,” he says.

The watery city, connected by a network of canals, is both vulnerable to rising sea levels prompted by climate change and a victim of its own popularity.

The World Monuments Fund (WMF) recently said tourist numbers were pushing Venice to “tipping point”, while the government has drawn up plans to lower visitor numbers by banning the biggest cruise ships.

To draw attention to the fragile city, Liu picked out three of Venice’s famous spots and got to work becoming invisible. Standing still in one of the most beautiful cities in the world may not sound too difficult, but Liu says each spot had its challenges.

“In Piazza San Marco, it took three or four hours. At the time there were a lot of people around and I needed to wait for most of them to come out of view before taking the photo,” he explains.

To camouflage into the background, Liu employed the help of “fantastic” local artists to paint him from head to toe.

Ponte di Rialto, one of Venice’s most photographed bridges, also presented its own unique challenge. “With the water flowing, the boat was moving all the time. I had to adjust the location of the boat on my body continuously. It took six or seven hours,” Liu says.

What appears to be the most simple of Liu’s Venice works, standing on a bridge above a canal, actually took the most time. “The colour was quite complex; the colour of the water was especially hard to capture,” he says of the image that took almost a whole day to create.

While thousands of photographs are likely taken in Venice each day, Liu hopes that his striking shots will prompt viewers to take a second look at the city. “I want to use these works to express my worry that such a beautiful place will disappear and to remind people to protect the environment,” he says.

Watch a video of Liu talking about his Hiding in the City project: