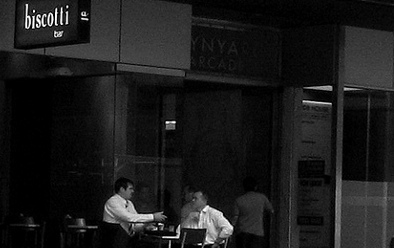 Coffee breaks are a ritual in Italian companies. Photo: James/Flickr.

What brought you to Italy and how did you find a job with an Italian company?

By the time I decided to come to Italy, I had been pondering a move to another country for a while and when I found myself coming back for holidays in Italy for the third year running, I thought, “why not move here?”

It started out as a largely irrational decision, though I tried to dress it up in sensible arguments: great climate, beautiful scenery, laid-back lifestyle, friendly people, the proximity to the rest of Europe and so on.

I took a rather reckless step by leaving my job to go to business school in Italy hoping to find work here afterwards. Then again, I took the decision two years before the financial crisis started, so I believed it would be feasible to get a job in the banking sector, a prospect that had vanished by the time I was looking for work. In the end, I was lucky to be hired by a large Italian company that came to the business school to recruit.

What is your role now?

I work in international business development, liaising with potential foreign clients and business partners looking to generate and finalize deals, which is a good fit given my background.

What kind of contract are you on?

I am on a 'contratto a tempo indeterminato', which is effectively a permanent position. It offers a substantial advantage in terms of job security, but these days people are rarely hired on such terms.

You've also worked in Eastern Europe and the US. How does the work culture differ in Italy compared to those countries?

I think that Italian companies are perceived as relatively inefficient, though it has more to do with lack of organization than lack of effort: I have met quite a few hard-working people.

Also, I think that consulting firms and law firms, for example, have more of a “cookie-cutter” international culture that differs less across country borders.

Italians are pleasant colleagues, happy to socialize in the office – coffee breaks are a ritual and most business discussions start with a bit of small talk as a social preamble and diplomatic opening gambit – but the downside is pervasive gossiping, and women are not the only culprits.

Do you feel treated differently as a foreigner, i.e are opportunities less open to you?

There are some limitations inherent in being a relative outsider. For example, it is both more of a challenge and makes less sense for a foreigner to work on domestic business in Italy, so I would guess that most foreigners working in Italian companies are involved in international activities.

Another tricky aspect is the language: I am quite fluent after more than six years in Italy, but I am still aware of a degree of “noise” when communicating in Italian compared to English – it takes me more effort, or more time, to understand and formulate ideas, even if the difference is slight by now. Italian companies in general are not great for mobility and career prospects – I’ll talk about it later on – but that is also true for Italian colleagues.

What are the trade-offs that come with working in Italy, and for an Italian company?

I would say that the trade-off is career prospects taken broadly, including both income and career mobility, versus good quality of life that is not necessarily directly proportionate to income. Italians have an enviable ability to enjoy life without concentrating on monetary aspects as much as many Americans or Londoners would.

So in addition to more holidays, you get a great climate, good food, lots of beautiful places to visit, to name a few. In that sense, my expectations were largely fulfilled, though when I was planning to move here, I managed to overlook the fact that Italy has historically had the lowest average salaries in Western Europe against substantial income taxes, especially compared to, say, Switzerland. But as I say, I know what I am paying for.

Italians complain that it is hard to progress within Italian firms. Is this true?

Unfortunately, it is. One of the first things I heard when I joined my employer was that you never progress between job categories. Italian job hierarchies are fairly fixed across companies; I was hired as a 'quadro', which is usually translated as middle management, though I do not have people reporting to me. The 'quadro' category offers more flexibility and benefits than regular employees, but considerably less than the next one – managers, or 'dirigenti'.

My advice to anyone thinking of getting a job with an Italian company or negotiating an offer is to try to push for a managerial position so long as they have a shot at it, as it will be very difficult to get promoted. This is equally true for Italian colleagues; I work at a large company and the instances of promotions are very rare.

Is it true that getting hired by an Italian firm is more about “personal contacts” than skill and experience?

In my case it was a combination of a business school degree and previous experience, but generally, contacts do play a major role. A lot of colleagues, especially at middle-management and managerial level, came to the company through personal contacts, though many of these are competent in their jobs.

Italian companies are also known for being chaotic and disorganized. Would you say there's a lack of long-term planning?

I am often reminded of an old joke that describes heaven and hell in terms of five attributes – including cuisine, police, and general organisation – picked from one of five countries, France, Britain, Switzerland, Italy, and Germany. The “hell” punchline is, “…and it’s all organized by the Italians.”

This is often true, though a lot depends on your boss and colleagues. I am not sure if the lack of long-term planning is the principal issue; often the biggest problem is the lack of tactical organization and coordination.

Young Italians complain about nepotism within Italian firms and that they’re not taken seriously because of their age. What is your experience of this?

There is some evidence of this, but the greater problem is young people, especially new graduates, being hired to work on temporary contracts for a few months and then being dismissed when the contracts are not converted to regular ones or are not rolled over – I have seen it happen to young colleagues here. It may not be exclusive to Italy, but is practiced here on a large scale, especially now that youth unemployment is high, there are many graduates looking for work, and companies are under pressure to cut costs.

Many young people are quite pessimistic about finding good work in Italy and look for jobs abroad instead.

What are the benefits of working for an Italian company?

Being able to live in Italy, of course. Having a manageable work-life balance, having sociable, polite colleagues, and being able to work on interesting projects, though that is not unique to Italy.

What would you advise other foreigners seeking work with an Italian firm?

Practice your Italian; unless you work for a multinational, your working language will be Italian, even if people around you know English.

Look for jobs that require international experience and make the most of your experience in drafting your CV and conducting interviews. By the way, Italian CVs tend to be quite long and detailed, so you can put in all the details you may want to highlight.

If you have a few years of work experience or an MBA (though MBAs do not have the same level of recognition here), see if you can negotiate a managerial position; it has slightly less job security compared to 'quadro' but has major advantages in terms of compensation.

Do not expect salaries commensurate with the major financial centres like New York or London.

And above all, manage your expectations and see how a move to Italy fits into your life – if you can see yourself sacrificing a chunk of money for the privilege of living here, how long you see yourself staying, what your exit strategy is – if you are planning a relatively short one to two year stint, it may help to have potential jobs lined up for your next move after this.