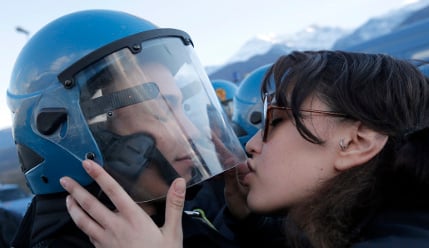 Police estimated the crowd at 7,000 while organisers vowing to "lay siege to this little part of the country that is indebting millions of Italians" put the number at 40,000.

Amid the high tension, a photographer from AFP snapped 20-year-old Nina De Chiffre, from Milan, kissing a riot police officer, although the clinch was not an attempt to convey a message of peace, she told La Stampa.

"I wanted to embarrass them," she said.  "I wanted to make fun of them, and I would say that we were successful."

The protestors plan a new action in Rome on Wednesday during a Franco-Italian summit to be attended by Italian Prime Minister Enrico Letta, his French counterpart Jean-Marc Ayrault and French President Francois Hollande expected to trumpet the project.

On Tuesday, drilling began in nearby Chiomonte to dig a reconnaissance tunnel for the controversial project.

Proponents of the high-speed rail line argue that it will rid the roads of a million trucks and avert some three million tonnes of greenhouse gas emissions each year.

The line will reduce travel time between Milan and Paris from seven hours to four.

The European Union will foot 40 percent of this sum, or €3.4 billion, while Italy and France will fund the rest, at €2.9 billion euros and €2.2 billion respectively.

Locals and environmental campaigners who say it is too expensive and unnecessary have staged a series of sometimes violent protests on the Italian side of the border.