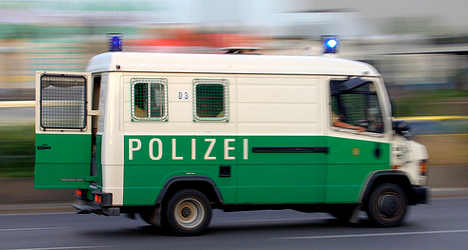 Around 200 police officers were involved in the raids. Photo: Till Krech/Flickr

A northern German regional bank and a wind energy company were among the locations searched to gather evidence in the operation, which involved about 200 officers in six states, they said.

The investigation focused on suspicions of money laundering and support of a foreign criminal organization, said prosecutors in the western city of Osnabrueck, who said searches also took place in neighbouring Austria.

"The accused are suspected of having laundered funds, through their companies in Germany, Italy, San Marino and Switzerland, of a 'Ndrangheta group," prosecutors said in a statement.

"They may also have acquired shares from this criminal organisation in the operator of a wind farm to hide its involvement."

The 'Ndrangheta is one of Italy's four big mafia groups and is based in the poverty-stricken southern region of Calabria.

Its mobsters have previously made headlines in Germany, including through alleged drugs trafficking and a 2007 shootout that claimed six lives outside a pizza restaurant in Duisburg.

News weekly Der Spiegel reported this week that the case involved a German lawyer and businessman from Rosenheim, Bavaria who has homes in Switzerland and Austria and had in 2009 launched a Calabria wind park project.

In July 2012, Italian police seized assets in Calabria in a crackdown on the 'Ndrangheta, including a 48-rotor wind farm in the town of Isola di Capo Rizzuto they said was suspected of having been built through shell companies based in Germany, San Marino and Switzerland.

German prosecutors said the locations searched Tuesday were not themselves the targets of the investigation and were fully cooperating, adding that "the investigations are targeted at business partners of these companies".

One of the locations searched was regional bank HSH Nordbank, which confirmed the raid but said it targeted third parties, not current or former employees of the bank.