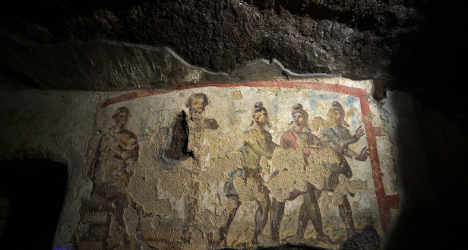 The Priscilla catacombs are re-opening to the public after five years of work. Photo: Filippo Monteforte/AFP

The Priscilla catacombs where Christians worshipped and buried their own are re-opening to the public after five years of work in which restorers used lasers to clean up the religious frescoes on the walls.

The Vatican's culture minister, Cardinal Gianfranco Ravasi, said the catacombs "were a living and breathing symbol of the first Christians, of their daily lives", as he took guests through the subterranean passages.

"This is where our roots are," Ravasi said.

A new function on Google Maps allows users to take a limited tour of the vast complex under Rome's Villa Ada park and gaze at the interiors with a 360-degree view like the one used above-ground for Street View.

A new museum on the site also opening to the public brings together some 700 fragments of finely-sculpted sarcophaguses found in the catacombs, which combine pagan and Christian burial traditions.

The Priscilla catacombs, which date back nearly 2,000 years and were built inside what used to be a quarry, are considered the most interesting in Rome and include a basilica where pope Sylvester (314-335) is buried.