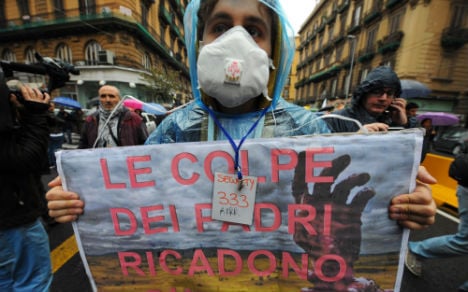 Thousands of people have taken to the streets of Naples this month in protest against the mafia burning toxic waste. Photo: AFP

Thousands have taken to the streets amid growing evidence that a far wider swathe of territory than originally thought was used by the local Camorra crime syndicate to burn or secretly bury millions of tonnes of waste for years.

The smoke-choked area north of the city has been dubbed the "Triangle of Death" and it is a grim sight – a short trip but a world away from the postcard images of the Bay of Naples and its famous cuisine.

Hidden out of sight down dirt tracks in the countryside, vast mounds of illegal and hazardous garbage, from broken sheets of asbestos to car tyres and containers of industrial-strength glue, lie rotting next to farmed fields.

Environmental groups say the toxic garbage could affect one and a half million people living in the Naples and Caserta provinces.

"People are terrified. Cancers are sharply up, along with allergies, foetus deformities and infertility," doctor Luigi Costanzo, who treats some 1,600 people in the town of Frattamaggiore, said.

Toxic waste has been buried in the area for decades, ever since the Camorra decided to branch out into the lucrative waste disposal business in the 1980s.

"There were those who suspected what was going on, but farmers who tried to go to the police were threatened," said Pasquale Crispino, a farmer who has grown potatoes in the area for years.

The latest revelations about the extent of the problem came last month when parliament made public a 1997 confession by top mafia turncoat Carmine Schiavone which described in detail how and where the rubbish was disposed of.

Schiavone's words carry weight because he is the brother of a notorious local crime boss, Francesco Schiavone, the jailed leader of the powerful Casalesi clan who is better known by his underworld moniker "Sandokan".

"It became a real business which brought money in but the residents risked dying of cancer within 20 years. I don't think they can be saved," he was quoted saying then – a claim that has fueled outrage over government inaction.

'We have killed your children'

Tens of thousands of locals took to the streets of Naples this month chanting "No to Camorra!" and slamming the government for failing to act.

More protests are planned as the extent of the problem comes into focus.

"This is a humanitarian crisis. There is not one home here that does not have someone sick with a tumour," said local priest Maurizio Patriciello.

"We see black smoke at every hour of the day and night, it steals our breath and sentences us to death. Those supposed to defend us have failed," he said.

According to environmentalist group Legambiente, some 10 million tonnes of industrial waste from across Italy and farther afield was buried in the area between 1991 and 2013, dumped mainly at night by over 400,000 lorries.

"Only politicians' widespread inertia, 'oversights' by controllers, a dense network of collusion and a mafia code of silence could have resulted in the 'invisibility' of such a column of lorries," it said in a report last week.

The number of tumours in women in the area has risen by 40 percent and those in men by 47 percent, according to the Pascale national tumour institute, and local cemeteries have sections for the growing number of child victims.

"As mothers we are paying the highest price. No-one has yet seen fit to tell us… 'we have killed your children, we accept responsibility and will intervene to save those living'," said Tina Zaccaria, whose daughter Dalia died aged 13.

Zaccaria is one of several mothers pictured holding photographs of their dead children on thousands of postcards sent to Pope Francis – who this week telephoned a local nun, Sister Teresa, to express his concern and support.

"Someone must pay, until then this will remain a no-man's land," Zaccaria said.

The government has set up a task force aimed at preventing garbage blazes, seizing polluted fields and devising a plan for a mammoth clean-up mission.

It has its work cut out: according to a parliamentary commission report, illegal waste in the Campania region "has caused incalculable damage… the progressive effects of which will reach a peak in around 50 years time."

But sceptics say that the Camorra, after creating an environmental time-bomb in the area, will now be angling for lucrative clean-up contracts.

Local campaigner Enzo Tosti said: "The opportunities are huge: if we mapped all the land where this stuff is buried we'd have to clean up half of Italy."