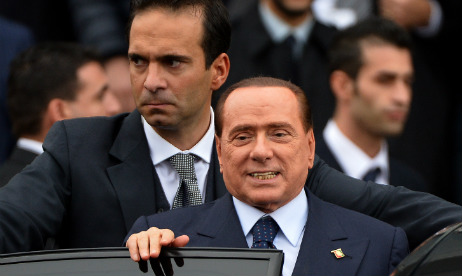 "Wednesday the Senate will vote to do away with the head of the centre-right, after 20 years of failed attempts. This move is called a coup d'etat," he told the youth branch of his Forza Italia ("Go Italy") party.

"The left should know I am not afraid, I have nothing to ask forgiveness for. I am completely innocent and am the emblem of my people," he added.

The 77-year-old media magnate and his allies have been trying to delay the moment the political guillotine will fall on a man who has dominated the Italian political scene since he entered it in the early 1990s.

So far attempts to buy time have failed. The vote is expected to go ahead as scheduled and, with Berlusconi's supporters in the minority, his ouster under a law banning convicted criminals from parliament looks set.

The ex-premier said he was organising a protest rally for Wednesday in Rome.

A combative Berlusconi said Italy's President Giorgio Napolitano should pardon him to spare him the embarrassment of doing a year's community service.

"The president should not hesitate even for a moment to prevent the disgrace of community service, even without me asking him to," he said, describing the idea of him doing service as "a humiliation for me, and also for the country".

The president's office has repeatedly said that any such pardon could only be granted once a formal request for one has been made.

The billionaire was given a 12-month jail sentence in August by the supreme court, but asked to serve it in the form of community service instead.

The punishment — not likely to be meted out before next year — could see him working in an old people's home, stacking shelves or cleaning up graffiti.