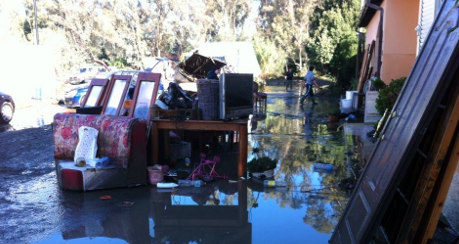 The port city of Olbia was completely flooded by the cyclone, which left 16 people dead and thousands homeless. Photo: Alessandra Raggio/AFP

Alessandra Dalu, a mother of one, is now preparing a case for unfair dismissal after she called her boss the morning after the Mediterranean cyclone triggered flash floods, leaving the port city of Olbia under water, telling him she would not be coming to work as she had to help her sister, whose home was flooded, Sardinia Post reported.

“My sister lost almost everything,” Dalu, who’s married to an unemployed labourer, told the newspaper.

“My father and brother also had major problems. I called my manager on Tuesday morning, when we knew eight people were dead – everyone in Olbia knew what had happened. He told me it wasn’t right [to take time off] because of it.”

Dalu, who had cleaned the businessman’s home for three years, said she was then fired over text message. “All he said was to give back the keys of the house,” she added.

Dalu, whose €550 a month salary was the family’s only source of income, has been offered legal services free of charge to help her pursue the case.

“I cleaned their house from Monday to Friday . I do not want money, only justice. Their money is cursed and if I received anything, I would give it to the victims of the flood as compensation,” she said.

Prosecutors on the island have opened five investigations into the deaths of 16 people during the November 18th floods, which also left thousands of people homeless. One person is still officially registered as missing.

The deaths sparked accusations that the island had not been sufficiently forewarned or prepared for the deluge of 440mm of rain – almost half the amount that usually falls on average in Italy over an entire year.