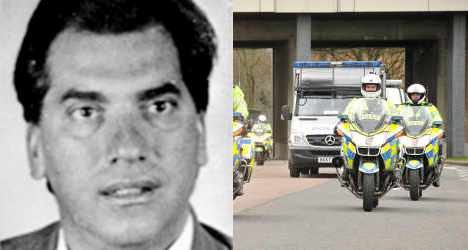 Domenico Rancadore, 64, is wanted in Italy to serve a seven-year jail term for his role in the Sicilian mafia.

He was arrested in London on August 8th and on Wednesday a High Court challenge against a decision to grant him bail was delayed to allow his legal team to find out about his condition.

His lawyer said that the hospital at the prison had given him "hardly any" information.

He had been living in a modest suburban house in west London under the name of Marc Skinner, with his English wife and children, when he was arrested.

He was granted bail at Westminster Magistrates Court in London on Monday.

However, he was not released after prosecutors issued notice to lodge an appeal.

The bail conditions included £50,000 (€59,984) security, residency at his home, a curfew, reporting to a police station twice daily, providing his phone number, keeping his mobile switched on and not applying for foreign travel documents.

Prosecutors told an earlier court hearing in August that Rancadore was a leader in a gang that "spread terror" on the Italian island of Sicily, "systematically murdering anybody who did not comply with the will of the members of the organisation".

Rancadore suffers from high blood pressure, angina and reflux, that court was told.