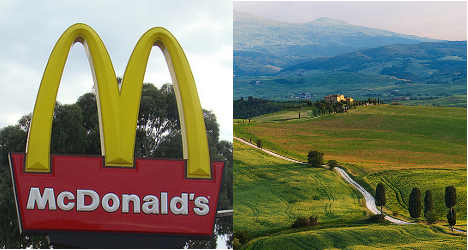 The hills and grove of cypress trees are a familiar image of the Tuscan countryside, and have been used in publicity campaigns all over the world.

But McDonald's has caused controversy by using a picture of a Siena hillside in its latest ad to help sell the 'Gran Chianina', a new burger that is made fully of meat from Chianina, a breed of cattle originating from Tuscany and Umbria, Il Sole 24 Ore reported.

Marco Ferrero, marketing director for McDonald's Italia, said the arrival of the burger represents the company's "firm commitment to the appreciation of Italian products".

But Roberto Rappuoli, the mayor of San Quirico d'Orcia, where the photo was taken, did not take kindly to the move and wrote to the US fast-food chain saying it had "misused images of the area".

Rappuoli informed McDonald's of a law which stipulates that any use of pictures or videos of the province for commercial purposes requires permission from local authorities.

“The law isn't a ban,” Rappuoli explained. “But it puts in place guidelines to avoid images of our town – which is a UNESCO world heritage site and famous all over the world –  from being misused.”

The rule states that companies must obtain written permission from the local council and make clear on the photo or video where the images are from, both of which McDonald's apparently neglected to do.

“If McDonald's wants to link its products with an area of excellence such as our own, it is free to do so,” the mayor added. “However, it must respect the rules.”

Along with Chianina meat, McDonald's said the burger is made up of "fried onion rings, nut sauce, lettuce and ewe's cheese", with all of its ingredients allegedly coming from Italian farms.