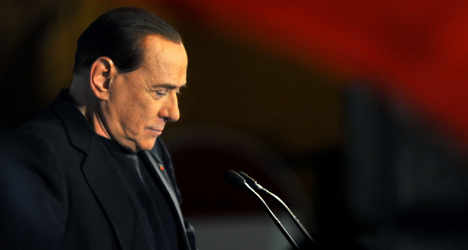 Between 7.00am and 6.00pm on Wednesday, the former prime minister was mentioned 255,000 times on the two websites, Blogmeter said.

Senators spent much of the day debating whether to boot the billionaire out of parliament, following his conviction for tax fraud.

Around the time that the vote result was announced at 5.42pm, 1,163 tweets were posted each minute.

The most widely circulated message posted on Twitter was not from a news organization, as might be expected, but a satirical blog. “It would have been better to defeat Berlusconi in politics. It’s really a shame that it was for a criminal offence,” Spinoza.it blog said. The message was retweeted 1,194 times.

Blogmeter also looked into peoples' reactions after learning Berlusconi was out of parliament for the first time in 20 years, with most of the social media messages accompanied by adjectives and adverbs of satisfaction, the agency said.

But Berlusconi and his supporters were not discouraged by the Twitter jibes. Following the vote, the media magnate posted: “We are here, we will be here!” (“Noi siamo qui, noi saremo qui!”) on Facebook, which over 20,000 users clicked ‘like’ to.