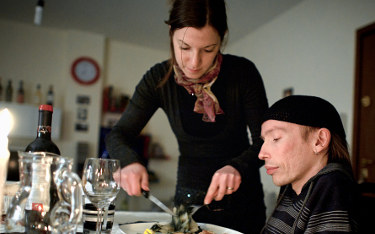 Maximiliano Ulivieri is campaigning for the role of sexual assistant for disabled people to be legalized in Italy. Photo provided by Ulivieri.

Maximiliano Ulivieri, one of the organization’s founders, launched a campaign to change Italian legislation earlier this year.

He told The Local that the aim is to prepare a course that would give special training – along the lines of what is already provided in a number of other European countries –  to people on how to cater to the sexual needs of disabled people. Once in place, the course will be taught in Bologna, where the voluntary organization is registered.

Ulivieri, who suffers from muscular dystrophy, the muscle wasting disorder, hopes to begin enrollments next year, but realizes it could be some time before the newly trained assistants are able to exercise their role.

CLICK HERE TO READ A FULL INTERVIEW WITH ULIVIERI

“I understand it will take a long time for any law to be put in place, but we can still offer the course,” Ulivieri said.

An online campaign to grant legal status to the role of sexual assistant has gathered over 600,000 signatures and also has the support of politicians from the Democratic Party and the Five Star Movement, Ulivieri said.

“Our first objective is to have the ‘profession’ of sexual assistant recognized, which is why we’re preparing the course now,” he said, adding that the main challenge will be cracking the taboo of disability and sex in Italy.

Parents of disabled children in Italy have also been campaigning for the role to be legalized. In August, the mother of a 30-year-old disabled man from Treviso appealed for brothels to be reopened in Italy so that her son can have an active and safe sex life.