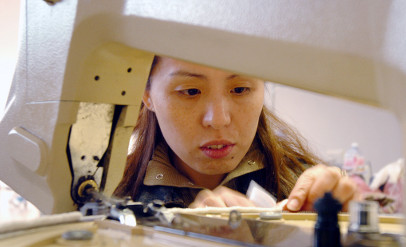 Local sources say there are around 50,000 Chinese nationals in Prato, many working in the textile industry. Photo: Paco Serinelli/AFP

Prato prosecutor Lorenzo Gestri said on Monday investigators were looking into possible charges of multiple manslaughter and exploiting illegal labour for both the Italian owner of the factory and the Chinese manager.

"The Prato massacre: the fire has lit up a scene in which jobs are goods and workers are cannon fodder," Nichi Vendola, head of Italy's Left, Ecology and Freedom (SEL) party, said on Twitter.

Investigators have not ruled out that the manager, believed to be a woman, could have died in the fire or be one of the three people wounded, according to Italian media reports. The only body identified so far is that of a Chinese undocumented worker.

It was not clear how the blaze started in the factory in the textile town of Prato, just north of Florence, where about 11 workers had been living and sleeping in close quarters on makeshift beds divided into compartments with cardboard.

Rescue workers said one of the victims had smashed a window in a bid to escape, but had been trapped behind security bars. His carbonized body was found with one arm reaching through the shattered glass.

Prato mayor Roberto Cenni declared Wednesday a day of mourning, amid calls for more to be done to address the working conditions of Chinese labourers in the city.

The presence of the Chinese garment workers is not always welcomed in the city, where numerous Italian firms have been forced to shut as they were unable to compete with the immigrants.

"We have already closed 1,200 businesses. Yesterday we seized two other warehouses, both with sleeping quarters" said Aldo Milone, the town councillor for public safety.

Despite efforts to clamp down on illegal businesses and dangerous working conditions, warehouses closed "often pop up again elsewhere under a different name a few months later," Milone said.

Enrico Rossi, head of the Tuscany region, called on the Italian and Chinese governments to "take measures" against businesses "which are often victims of extortion by Chinese organised crime."