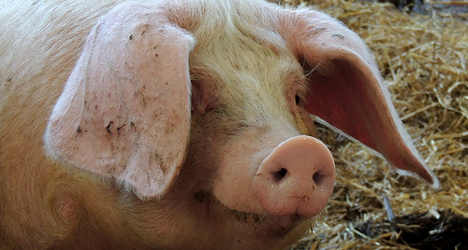 A litter of piglets was set up outside parliament as part of the protest. Photo: Orangeaurochs/Flickr

Farmers also set up a picket at a border point in the Alps, inspecting incoming trucks carrying a variety of foodstuffs like Lithuanian pork, German mozzarella and Austrian wheat that are eventually sold as Italian.

In a campaign entitled The Battle for Christmas: Choose Italy, the farmers' union Coldiretti said that around 33 percent of food products sold in Italy and exported abroad are made using foreign imports.

"Our farms are collapsing!" said Augusto Musardo, 23, a wheat and olive farmer from Lecce in southern Italy, among hundreds protesting outside parliament in Rome next to a banner reading "Stop the Swindles".

"The government should introduce more transparent labelling and block these foreign imports," he said.

Coldiretti said two out of three hams sold as "Made in Italy" were in fact produced with non-Italian pork, accusing the country's biggest prosciutto maker Parmacotto of tripling pork imports over the past year.

But the company immediately denied the charges, with a spokesperson saying it had not increased imports "by a single kilo" and adding: "Parmacotto uses raw material bought in Italy for 100 percent of its needs."

Hams and cheeses were strung up at the protest in a symbolic hanging and a litter of piglets was set up outside parliament a banner said that for every 1,500 foreign hams imported, one farmer's job was lost.

Agriculture Minister Nunzia De Girolamo supported the protesters saying that the defence of genuine Italian products could be "a way out of the crisis" and accusing "speculators of tricking consumers".

But the Italian employers' union Confindustria accused Coldiretti of following "a protectionist logic" and said the minister's words were "disconcerting", defending the principle of free movement of goods inside the European Union at the centre of the dispute.

"Eight thousand of those jobs were in the pig farming sector alone – the equivalent of a large industrial firm. A country in crisis like ours cannot afford it," Coldiretti head Roberto Moncalvo said at the protest.

Stefano Bellucci, a councillor from Guardea in central Italy, said pork imports from other parts of the European Union had hit his small town particularly hard.

"These imports are out of control. The effect has been violent for us," said Bellucci, 35, wearing the Italian flag band across his chest used by local officials.

He said Italians preparing their Christmas banquets should "avoid big names and buy from small farms".

"The labelling is misleading. It's 'Made in Italy' but only relatively speaking," he said.