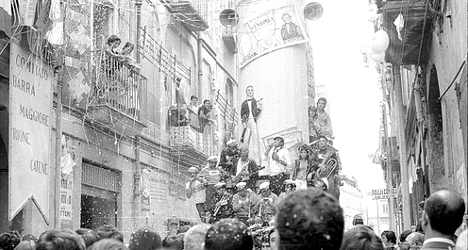 The festivals have been awarded the status as they “bind communities together through the consolidation of mutual respect, cooperation and joint effort,” UNESCO said in a statement.

The Descent of the Candlesticks (Discesa dei Candelieri) procession, held annually on August 14th in Sassari, Sardinia, was celebrated for its procession of wooden obelisks. Palmi, in the southern region of Calabria, also made it onto the list for its August procession to honour the Virgin Mary.

Nola’s Festival of Lilies (Festa dei Gigli), in Campania, was noted for the huge flower structures that are marched through the town to mark Saint Paulinus’ day on June 22nd.

A fourth event, held on September 3rd in Viterbo, close to Rome, was included for its Tower of Saint Rose (Macchina di Santa Rosa) procession through the city.

All involve the communities’ musicians, singers and artisans, with techniques passed through the generations. Putting the processions together each year “aids cultural continuity and reinforces a strong sense of identity,” UNESCO said.

This is not the first time UNESCO has recognised Italy’s traditions on its cultural heritage list. Sicilian puppet theatre, Sardinian pastoral songs and violin craftsmanship in Cremona, in Lombardy, have also been included.

The Mediterranean diet also features on the list, as “the foundation of the cultural identity and continuity of communities” in Italy and other countries.

Earlier this year, Mount Etna and the Medici villas were awarded UNESCO’s World Heritage status, adding to Italy’s collection of 47 other such sites.

Despite the praise, the organization has also warned Italy that it needs to better manage its cultural heritage, with Pompeii in urgent need of restoration.