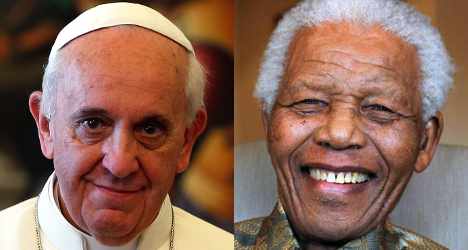 “I pray that the late president’s example will inspire generations of South Africans to put justice and the common good at the forefront of their political aspirations,” the Pope said in a telegram addressed to South African President Jacob Zuma.

The pontiff paid tribute to “the steadfast commitment shown by Nelson Mandela in promoting the human dignity of all the nation’s citizens and in forming a new South Africa built on the firm foundations of non-violence, reconciliation and truth”.

The death of 95-year-old Mandela, who was imprisoned for 27 years in South Africa, was announced late on Thursday by Zuma.

A number of other Italian politicians paid tribute to South Africa’s first black leader, with Rome Mayor Ignazio Marino describing Mandela as "a source of inspiration for politics, rights and culture".

IN PICTURES: Italy reacts to death of Mandela