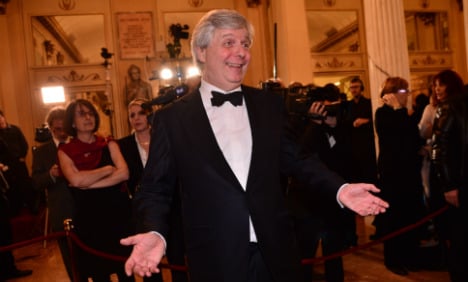 Italy's economic and political elites were descending on the famous music temple in the country's economic capital for the event, which starts at 1700 GMT.

Milan has been seized by a "fever" in anticipation of the performance and even the mayor's office is using an aria from "La Traviata" as its call-waiting tone.

Giant screens have been put up around the city to relay the opera live and there will be screenings in cinema across Italy and in other parts of the world.

The work is still closely associated with the late diva Maria Callas, who performed it more than 60 times in her career, including in a particularly memorable 1955 performance produced by director Luchino Visconti.

But performers said they were not feeling the pressure.

Conductor Daniele Gatti said "La Traviata" was "a gift from heaven" while Russian producer Dimitri Tcherniakov said he was amused by the "agitation" over the work.

Tcherniakov said his production would be about exploring "our relationship with love and sentiment".

This will be the last opera season for La Scala's director, Frenchman Stephane Lissner, who is leaving next year to take over at Paris Opera.

Musical director Daniel Barenboim is also leaving at the beginning of 2015.

"The message I would like to put out with this 'La Traviata' is look to the future," Lissner said.

Fashion designer Raffaella Curiel, who designs dresses for the opening night, said she was disappointed that the fashion on display on Saturday would be "very sober".

"With this mania for austerity, of not showing fur coats, jewels, wealth, people who have means are not spending.

"If even on an opening night people start putting on clothes from 10 years ago, Italy will never recover."